Turn That Noise Down - Gerry Rafferty 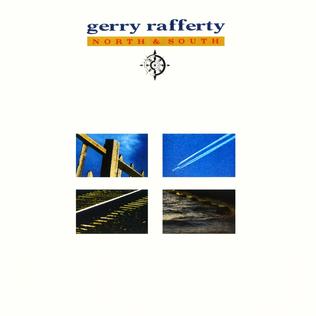 So many well-known albums turn 30 this year and Steve Taylor-Bryant and Susan Omand travel back to 1988 to revisit some of the sounds of their youth that made parents shout "Turn that noise down!" This week Susan heads North and South...

Say the name Gerry Rafferty to people and I can pretty much guarantee you that they’ll all come up with “that 1970s saxophone song” Baker Street. However, the man was far from being the one hit wonder that most people think he is. Some Scots will come up with the fact that he was in the folk band the Humblebums with his Glaswegian pal, a certain William Connolly esq. Others of a certain age might remember him as part of Stealer’s Wheel – yes you’ve heard their music too, or at least you have if you remember the ear slicing scene from Reservoir Dogs because “Stuck in the Middle With You” was theirs. But I bet very people will mention his 1988 album North and South, a forgotten masterpiece to my mind and incredibly difficult to find (legally and/or not scratched to bits) these days.

From the start, the album mixes so many different influences, from Celtic Uilleann pipes (played incidentally by the god that is Davy Spillane) to South American Latin rhythms, Cajun fiddles to Middle Eastern percussion. There are blue-grass riffs, like the one in the title track that sounds like a direct lift from The Devil Went Down to Georgia, to the reggae beats on Unselfish Love. There’s shades of the laid-back Baker Street in the saxophone heavy Moonlight & Gold but then Tired of Talking kicks in with an upbeat country steel guitar sound before falling back to an almost George Harrison-like Travelling Wilburys vibe for the “end of the night smoochy” song Hearts Run Dry.

Because each track is so different, but still so much the Rafferty sound, it’s difficult to pick a favourite but, if pushed, I’d have to say one of the singles from the album, Shipyard Town. That intro never fails to give me goosebumps but you’ll be dancing by the end of the song.