Turn That Noise Down - Erasure 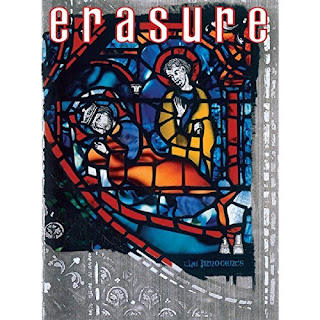 So many well-known albums turn 30 this year and Steve Taylor-Bryant and Susan Omand travel back to 1988 to revisit some of the sounds of their youth that made parents shout "Turn that noise down!" This week Susan tries The Innocents of Erasure...

Erasure is one of those bands for me that was always just around the periphery of my music collection. The big hits appeared on the compilation album that I bought – yes I am that person that bought The Hits albums because they had by far the better song choices and the Now That’s What I Call Music albums would never amount to anything – but I had never bought any of their albums at the time. So when the chance came up to give The Innocents a listen for this project, I jumped at the excuse to see if there was anything more to 1980s Erasure than the charts gave them credit for back in the day.

The Innocents was really the album that dragged them into the limelight on both sides of the Atlantic, even though there had been two previous studio albums for the duo of Vince Clark and Andy Bell. This is the album that has the huge singles A Little Respect, Ship of Fools and Chains of Love, all superb 80s synth pop dance tracks that were guaranteed floor fillers at the discos. But there are 8 other tracks on the album that I hadn’t heard before. Phantom Bride, I’m sorry to say, is a bit filler-y. Hallowed Ground is interesting because it’s basically Culture Club’s Church of the Poisoned Mind but to the same, slowed down, backing riff as A Little Respect. Heart of Stone is a great showcase for Andy Bell’s vocals and the instrumental Sixty Five Thousand, my favourite track on the album, does the same for Vince Clark’s superb keyboard work. Yahoo sounds very… um… Eurovision but Imagination could be Supertramp’s Breakfast in America over again, even down to the choice of synth voice and rhythm in the intro. The wonderfully named and almost waltz-like Witch in the Ditch comes next and finally The Weight of the World round off the standard album (the remastered one has two more tracks on it, including a marvellous Motown rip off version of River Deep Mountain High, the old Tina Turner song).

So had I missed anything by not buying this album thirty years ago? Nothing earth-shattering I must say but I also don’t think it was a waste of time to listen to it, it was all fine boppy stuff. If you love the singles, you’ll enjoy the album and kudos to the band for still putting out new music now that echoes back to their seminal sound, created back there in the 80s with the likes of The Innocents, but has enough of a reinvention to keep it sounding fresh and new. For that alone, if nothing else, Erasure deserve A Little Respect.