Turn That Noise Down - Butthole Surfers 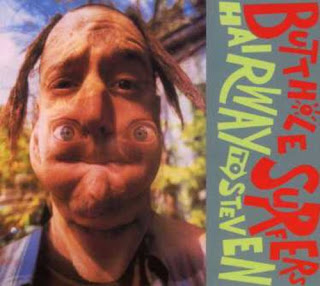 So many well-known albums turn 30 this year and Steve Taylor-Bryant and Susan Omand travel back to 1988 to revisit some of the sounds of their youth that made parents shout "Turn that noise down!" This week Steven climbs the Hairway to Butthole Surfers ...

An amalgamation of noise. That’s what my dad said about a band I played in during the 1990’s. we were experimenting with our instruments, not really searching for a distinctive sound; the world had grunge and Britpop for those who wanted stuff that sounded the same. Our little four piece came from different musical backgrounds. Our guitarist and vocalist was a 70’s child, all Led Zeppelin and Jimmy Hendrix, our bassist was funk personified, our keyboardist was a classical pianist by trade, and I was young and still cooking. I had a military and orchestral trained mind, I had a penchant for cheesy pop, I wanted to be in the Red Hot Chilli Peppers, and I wanted to be both a commercial success and an underground hit. Throw all this into a pot and stir it together and you can see why I love Butthole Surfers and Hairway to Steven in particular.

On the one hand it’s a Sergio Leone soundtrack, on the other it’s the older brother of the Chilli’s massively underrated One Hot Minute. It’s irreverent and juvenile, it’s musically intriguing whilst seeming accidental. It really is that amalgamation of noise. Get inside though and the noise makes sense, there’s beauty in there if you open your mind as well as your ears. Tracks like I Saw an X-Ray of a Girl Passing Gas are utter fun, the kind you’d dance to after one too many beers, the near thirteen minute Jimi is an over extravagant medley of everything the Surfers were capable of musically and is well worth a listen and whilst you’d comfortably hear John E. Smoke in a Western movie, you completely love Backass in a Tarantino film, it’s Tarantino before he knew who he was. The Butthole Surfers never bettered Hairway to Steven in my opinion, the earlier stuff too experimental, the later chasing the corporate dollar, but on Hairway to Steven there is 41 minutes of joy.