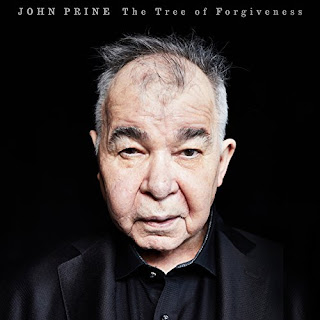 Susan Omand is trying to listen to some new music by randomly picking albums to listen to. Today is the turn of John Prine's new album The Tree of Forgiveness...

It is to my eternal shame that I didn’t know the name of John Prine when he came up on the list of new album releases at the weekend. To be honest, I only picked the album to give it a listen because of the cover – I wanted to see if it was one of these post-pop ironic “let’s put an interesting, cool-looking, random old guy on the cover and see who falls for it” things or if the cool-looking old guy really was actually the creator of the music.

Turns out it’s the latter, and I should have known him because he’s worked with some of the biggest names in country music and influenced so many more. Kris Kristofferson apparently discovered him back in the early 70s, as Prine hung around the folk scene with friend and co-writer Steve Goodwin, and the likes of Bob Dylan, Johnny Cash and Roger Waters cite Prine as one of the great Americana songwriters. Indeed, he wrote one of my favourite Vietnam protest songs, Sam Stone was released in 1971, and I didn’t even make the connection til I looked him up to find out who he was for this review. Incidentally if you haven’t heard Sam Stone, you need to go look it up – it has some of the hardest hitting lyrics about the consequences of drug addiction in war veterans… “There's a hole in daddy's arm where all the money goes.”

Anyhow, I digress slightly. The Tree of Forgiveness is the new album of thirteen tracks of all original material and they’re all worth a listen. And I mean listen. This isn’t an album that should be treated as background music, although musically it is decent country/folky stuff – some upbeat, some slower. But no, for once, you need to stop everything else and just sit and listen to it. Really listen.

The fight of years past has mostly gone, there’s not hard-hitting protests from the 70s, instead this is an album by a man in his 70s, reflecting on his life and where he is now. There’s loneliness and existentialism, happy memories, what if’s and might have beens but there’s also a sense of peace, that he’s okay with where is and has accepted what is going to be.

There’s a lot of humour, like Egg and Daughter Nite Lincoln Nebraska 1967

And, yes, there is still the odd acidic snipe to prove there’s still a bit of fight left in there, like When I Get to Heaven

Well, I might even invite a few choice critics, those syph'litic parasitics
Buy 'em a pint of Smithwick's and smother 'em with my charm

But my absolute favourite on the album is a song called The Lonesome Friends of Science. It’s funny, poignant and thought provoking all at the same time – contemplating the universe inside as well as in the sky. So much depth that I’m almost afraid to think about it too hard.

The lonesome friends of science say
"This world will end most any day"
Well, if it does, then that's okay
'Cause I don't live here anyway