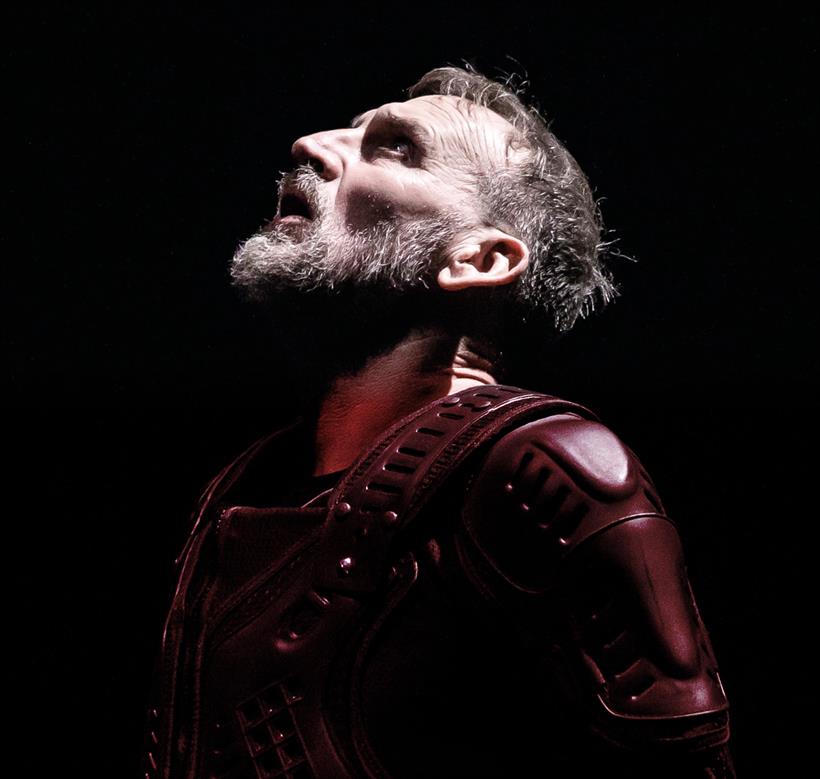 So, I used to think that the hardest reviews to write were those you wrote about things you really liked. But, I realised that it is the things that you can’t build up strong feelings about either positive or negative that cause you problems. I saw this production of Macbeth at the RSC in Stratford-upon-Avon. It wasn’t terrible. It wasn’t brilliant. It just was.

I think part of the problem is that the director, Polly Findlay, has strong ideas about what Macbeth is about. And she wants to tell us all about them. This isn’t subtle. It’s like watching a version of the play with live director’s commentary. It also seems to show a lack of respect for the audience, but I have said that before. It is a director’s right to tell their own version of a story, but I don’t think they need to do so without subtlety.

Findlay hooks onto the importance of time in the text and makes it a key part of the play. To the extent of putting a whacking great digital clock above the stage that counts down Macbeth’s tomorrows from the death of Duncan until he has lit his way to dusty death. It’s quite nice if you want to know how long you’ve got left before you can hit the pub but I’m not sure what it adds to the play.

The one or two of you that have read my previous reviews will note that I have something of a puritan focus on THE TEXT when it comes to Shakespeare (and pretty much any play by any author.) The words are what counts. The words and the performance of those words. You could, if you were to go fully Brook do Shakespeare on a bare stage and you could see the play’s themes yourself. Every extra layer that you put upon it should be questioned hard. Because what you’re in danger of doing is like restoring the Mona Lisa by slapping a layer of Dulux over it.

That’s all a long-winded way of saying that a lot of time this Macbeth feels flat. Not always, but too often. It certainly seems to inhibit Christopher Eccleston until the second half – sorry, I know I always talk about plays like they’re football matches, but I can’t help it -when he seems to get a grip of the words and his performance takes flight. The opposite seems to happen to Niamh Cusack, who starts of superbly and then seems to lose her way. The sleep walking scene just feels too busy with her zipping about the stage like a hyperactive fly. Cusack is too good an actress for this and once more I fear this was a directorial choice.

The Three Witches are played by young girls, dressed like they’ve come in from a sleepover at a friend’s house. Now, I find them mildly sinister, but I suspect they might have been even more sinister if they’d be dressed a little more abstractly.

The best performance in the play, for me, was Edward Bennett as Macduff. He’s subtle. The pause after he’s been told the news of the death of his wife and children packs more of a punch than virtually anything else in this production. The horror of it all seems to hang in the air.

The other performance worth watching was the Porter (Michael Hodgson). The Porter often gets cut from Macbeth as the whole ‘Knock, Knock’ thing can test people’s patience but here it has been kept in and is played with a sinister delivery that makes the Porter seem a little scary. The Porter is also used in other ways. He keeps a running total of all the deaths in the play by quietly chalking lines on the wall. Hodgson’s performance is excellent. And having criticised Findlay for her (assumed) directorial choices earlier I should give credit where it is due here.

So, is it worth seeing? Well, yes. It entertains. It’s a short, sharp two hours and five minutes long. As I said at the beginning the problem isn’t that it is terrible, but that it is often flat with only an occasional high moment. I that if I was a teacher I’d put a note here saying, ‘Not bad. Could do better.’


Find out more and book tickets at https://www.rsc.org.uk/macbeth/