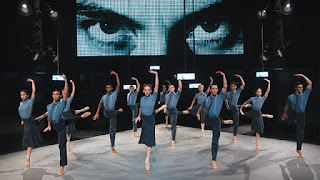 Now out on DVD & Blu-ray, a reminder of Susan Omand's thoughts from 2016 on The Northern Ballet's performance of 1984...

Don’t let the fact that this is called “ballet” put you off. Otherwise you will miss out on what is one of the most powerful adaptations of Orwell’s classic that I have seen in a long time.

As you might expect, this is not tutus and lunchboxes classical ballet but a gritty and expressive retelling of the story without words. The staging is sparse, dominated by the back video screen upon which Big Brother’s eye gaze out, although the images and colouring, which I shall come back to, on the screen change as the story progresses, almost leading the narrative rather than reflecting it. Talking of narrative, it helped to be very familiar with the story, although those who don’t know it would get the general gist but would miss out on the subtleties and cleverness built into the production and this is what I mean about the use of colour – there was always a dominant block colour on the set at any time on both set props and costume, blue-grey for The Party, yellow for the Brotherhood, red for freedom, black for the Thought Police and any deviation from that dominant colour was immediately notable on stage. The costumes themselves were as far removed from classical ballet as you could get too with a real uniform feel to the suits and shirts of the workers in the Ministry of Truth and this uniformity is carried through in their impassive facial expressions and highly synchronised movements, making any breaks from that again highly visible.

As Act One of the two-act performance progresses, the characters evolve very well and the chemistry between Winston (Tobias Batley) and Julia (Martha Leebolt) is very apparent, especially in the final scene of the act where their dance of intimacy, far from the prying eyes of The Party, is as different to the previous conformity as it can be, both in terms of fluidity of movement, as opposed to mechanical synchronicity, and the amount of lifts and aerial work rather than the very floor based dancing of before. But it is in Act Two that the choreography by Jonathan Watkins really comes in to its own. Winston’s capture and torture scenes are nothing short of stunning as O’Brien enacts untold horrors in deliberate, almost slow motion movements and the silent scream of Winston is breath-taking. The final scene too left me with shivers and almost in tears, an epic performance. I was exhausted by the end.

I also need to mention the music, written especially for the ballet by Tony-nominated composer Alex Baranowski, as it was almost a character of its own evoking all the emotion, or intentional lack of it, that the ballet required with an almost military edge to The Party scenes and the minor key and dissonant chords at other times really adding to the “on edge” feeling that was present throughout, whether from the excitement of illicit love, danger of subversion or horror of things to come.

If you know the story of 1984 (if you don't, read Steve's book review on The DreamCage here) but you’ve never tried watching ballet before and wonder if you will like it, this performance will convince you of how evocative good ballet can be. It is 90 minutes of almost overwhelming literary choreography, as powerful and shocking as the original book.