News - Stop Me From Falling 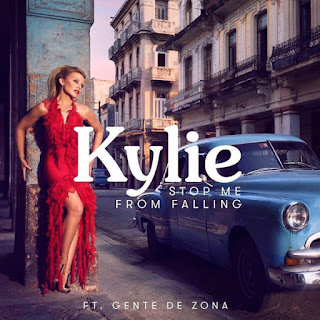 Last month, Kylie released a video for the original version of ’Stop Me From Falling’, which was shot in Paris. The original single is found on her new album ‘Golden’ – which went straight to the top of the UK Album Charts upon its release last week.

This new version of ‘Stop Me From Falling’ - which came out yesterday - is directed by Sophie Muller and was filmed in Cuba. It features Gente De Zona, the Cuban reggaeton group who have won multiple Latin Grammy Awards and have amassed a huge following to date.

Golden is Kylie’s first studio album in four years and her fourteenth studio album in her pop career. It was mainly recorded in Nashville, which was a first for Kylie, and the change of recording location has apparently influenced the "Kylie sound"

Line dancing in stilettos anyone? Because those shoes sure aren't Cuban heels.


Later this year, Kylie will bring her extraordinary creativity as a live performer back to the stage this autumn when she plays a UK and Ireland arena tour. Full schedule below:

Full tracklisting for ‘Golden’ below:
Dancing
Stop Me From Falling
Golden
A Lifetime To Repair
Sincerely Yours
One Last Kiss
Live A Little
Shelby ’68
Radio On
Love
Raining Glitter
Music’s Too Sad Without You (with Jack Savoretti)
Email ThisBlogThis!Share to TwitterShare to Facebook