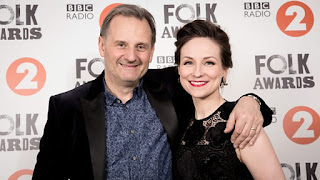 The winners of the Radio 2 Folk Awards 2018 have been announced (contains spoilers if you're going to watch/listen to it on Sunday)...

A key highlight of the music calendar, now in its 19th year, the awards produced by 7digital saw a host of music stars come together in Belfast for an evening of recognition and show-stopping performances. The ceremony was presented by Radio 2 Folk Show host Mark Radcliffe and world renowned Gaelic singer, Julie Fowlis. Talented artists received prizes including Folk Singer of the Year, Best Duo, Best Album, Musician of the Year, Young Folk Award and many more.

The Good Tradition Award went to the Armagh Pipers Club to recognise their contribution to the preservation, dissemination and progression of traditional music over more than 50 years.

Folk Singer of the Year was awarded to Scottish singer-songwriter and musician, Karine Polwart, a talented artist who is also a theatre maker, storyteller, spoken-word performer and essayist.

Dónal Lunny took to the stage to perform with acclaimed musician Zoë Conway on the fiddle, and earlier in the evening Cara Dillon performed accompanied by Sam Lakeman on piano and John Smith on guitar.

Opening the show with a rousing performance of Devil In The Woman was Eliza Carthy & The Wayward Band, driven by brass and electric guitar. And across the night there were also fantastic performances from Lankum, with their song What Will We Do When We Have No Money?, Paul Brady with a solo acoustic rendition of the ballad Lord Thomas And Fair Ellender, and finally, a nine-piece from the Armagh Pipers Club brought the evening to a close with a performance of three specially composed new songs. 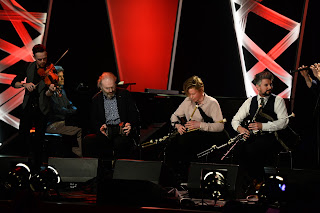 The evening included the presentation of the 20th annual BBC Radio 2 Young Folk Award, an educational contest that exists to discover the next generation of folk acts. Mera Royle, a young harpist from the Isle of Man, was the recipient.

Lewis Carnie, Head of BBC Radio 2 says: "I’d like to congratulate all of tonight’s winners – the calibre of nominees was extremely high and the wealth of talent that was seen on stage across the evening in Belfast was spectacular. The Radio 2 Folk Awards is an annual celebration of the thriving folk music scene - supporting both established and burgeoning folk musicians – and part of our specialist music content that Radio 2 is proud to broadcast across the year."

Influential singer-songwriter Nick Drake was inducted into the Radio 2 Folk Awards Hall of Fame to celebrate the lasting impression he has had on folk music, despite passing away at the age of just 26 in 1974. Had he lived, he would have turned 70 this year.

Olivia Chaney performed a special tribute with a sublime piano-based interpretation of Drake’s essential song, River Man. Olivia is a great fan of Nick Drake and a multi-talented singer, musician and songwriter. Her collaboration with The Decemberists, called Offa Rex, was nominated for a Grammy Award in 2017. Her second solo album, Shelter, will be released in June 2018.

Although Nick Drake’s music didn’t garner commercial success during his lifetime, decades after his early death, his music would find a wide and reverent audience. Featuring sublime and original guitar work which is heavy with meaning and mood, his work has been highly influential on singer-songwriters of all kinds. Actor Gabrielle Drake, Nick's elder sister, was present at the Radio 2 Folk Awards to tell the audience how her famously shy brother might have felt about the occasion.

The Folk Awards will be broadcast on Sunday 8th April on BBC Four at 9pm and on BBC Two Northern Ireland at 5.30pm, plus selected highlights will be available to watch at bbc.co.uk/radio2 after the show.

MUSICIAN OF THE YEAR presented by Leo Green
Mohsen Amini

BEST ALBUM
Strangers by The Young’uns