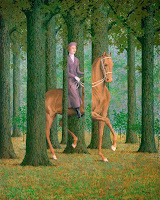 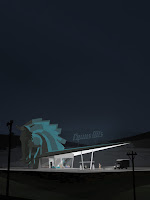 Videogames: Design/ Play/ Disrupt celebrates the innovative and rapidly changing design field of videogames coming to the V & A in London this autumn, in what will be the first exhibition of its kind...

The V&A will explore how contemporary designers, players and critics are pushing boundaries in playful and radical new ways. Rare glimpses from the creative process of developing games such as The Last of Us to Kentucky Route Zero, including original prototypes, early character designs and notebooks, will be shown alongside cultural inspiration from a Magritte painting to a viral cat video.

From blockbuster titles produced by leading studios such as Splatoon from Nintendo, to independents such as Journey by thatgamecompany, the exhibition will show the craft and skill of creating ground-breaking videogame design. These examples will be presented alongside large-scale immersive multimedia and interactive installations from Minecraft to League of Legends and investigations of the social and political issues in the field, offering an insight into the design process, community and culture of videogames.

The exhibition will explore videogame design since the mid-2000s, when major technological advancements, such as increased access to broadband, social media and newly available means of making, transformed the way games are designed, discussed and played. With at least 2.2 billion players worldwide, the reach and range of gaming will be examined within creative online player communities who modify games and create fan art; spectators and competitive performers at large scale esports stadium events and surprising spaces of the niche DIY arcade scene. Videogames: Design/ Play/ Disrupt builds on the V&A’s activity as a space for contemporary debate, which actively collects, displays and programmes digital design.

Tristram Hunt, Director of the V&A said: “There is a rich universality to videogames in contemporary culture. This is the right time for the V&A to be building on our active interest in videogames to investigate this exciting and varied design field at the intersection between technology, engineering and broader visual culture, presenting the influences, inspiration and debates that define it. There is a wealth of creativity to explore, from the craft of the studios to the innovation of the audience as players. The exhibition will provide a compelling insight into one of the most important design disciplines of our time.”

The first section of the exhibition will examine the design inspirations, craftsmanship and creative practice behind a series of individual games. These are created by a new generation of designers from large established studios to solo independent designers, as well as from a range of other creative disciplines such as new media and music composition. Highlights include character design sketches, a motion capture suit, animations and working notes of the creative director from The Last of Us from Naughty Dog. A visually stunning post-apocalyptic blockbuster,this title is comparable to a Hollywood production in ambition and scope. Other exhibits include prototypes, design drawings and desert research footage from Journey, a smaller independent game, demonstrating how videogames can evoke emotional concepts of friendship, connection, positivity and love. Also shown will be works that have influenced creators such as Magritte’s painting Le Blanc Seing, the inspiration for the parallax scenography of Kentucky Route Zero (both pictured above).

Videogames have the potential to consider complex and sensitive subject matters such as representation, race, sexuality and geo-politics. As tools to make games have become more available and distribution has broadened, game designers have begun to engage more widely with social and ethical debates. The next section will present interviews and opinion from influential game makers and commentators who are leading this discussion such as developer Rami Ismail and advocate Tanya de Pass. Here ideas about videogames and what they should be are challenged - as well as how this relates to society as a whole.A selection of works will illustrate such themes including how do you Do It, a semi-autobiographical game by Nina Freeman which tackles the discovery of sexuality through dolls and Phone Story by Molleindustria, a satirical mobile video game which invites players to consider negative effects of their consumption on people in the globalised world.

The third section celebrates the dazzling imagination and collaborative creativity shown by videogames players in real and virtual communities, transcending the role of the designer to democratise design on a vast scale. The double-height exhibition space in this section will feature a dramatic and immersive installation that explores the role of the player as co-creator.

This will show the astonishing feats of engineering and construction undertaken in Minecraft from the recreation of the continent of Westeros in Game of Thrones to the mass spectacle of esports tournaments such as League of Legends World Championships. There will be examples of fan art and cosplay created by enthusiasts who interpret the medium in their own style and create costumes and accessories to represent themselves, or even their pets as characters.

The playful finale will look at the rise of the grassroots DIY arcade scene, showcasing handmade arcade cupboards and interactive installations of spectacle and performance. Unusual and remarkable games made by DIY enthusiasts and creatives will be shown such as Bush Bash by SK Games, played in a sedan car cut in half and fitted with a display for two players to shoot and drive. Visitors can also play games such as Line Wobbler by Robin Baumgarten. Created from a custom-made spring controller and a several metre-long ultrabright LED strip display, it was inspired by a viral video of a cat playing with a door-stopper spring.

The V&A actively collects digital design and is expanding its collection extensively in this area, exploring how videogames as digital objects can be preserved and exhibited. Related activity has included a videogames-themed Friday Late in September 2017 which attracted nearly 8,000 visitors, held in collaboration with a major conference Parallel Worlds: Designing Alternative Realities in Videogames. Other activities have included the V&A Digital Design Weekend which features creators sharing their creative process, workshops for young people about careers in games design, community projects and digital learning programmes.

Highlights of the Exhibition include

A key loan item secured for the exhibition was René Magritte’s La Blanc Seing (The Blank Signature), a surrealist painting of a woman riding a horse through a forest both in front of and behind the trees, playing with the viewer’s perception of reality. Magritte’s optical illusion influenced the parallax scenography in the forest scene from Act II of magical realist adventure game Kentucky Route Zero (2013) by Cardboard Computer, who were also influenced by theatre, set design, typography and Brutalist architecture in their approach. The creator’s playful use of 3D graphics tricks the player’s perspective to create a real-time, interactive homage to the painting. 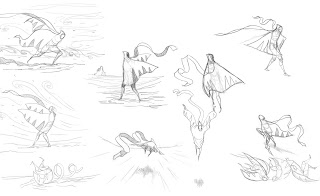 Journey, developed by thatgamecompany, is a beautifully expressive and lavishly visual game in which anonymous players online control a robed figure through a vast desert towards a mountain, with the chance to emotionally connect with companions along the way. The pencil character sketches show the important aspects of creating dynamic character designs that artistically define movements within a virtual landscape. The mechanical elements of the game were tested through developing a basic 2D prototype, also presented in the exhibition, bringing together the dual dynamic of art and engineering in the medium. The pencil character sketches show the important first aspect of this design process in developing an authentic portrayal of the hero’s journey. 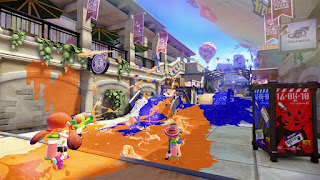 A compelling example of the innovative approach that makes their videogames appeal to a wide audience, Splatoon reflects Nintendo’s ability as a design company to reinvigorate genres, in this case the online third-person shooter, and discover new gameplay types. The game, by a young design team, is representative of the new wave pushing the boundaries of the medium, centres around characters that transform between human and squid forms, shooting ink to splat their turf and aiming to cover the largest area. It gives players the opportunity to portray themselves in street style influenced by contemporary fashion and level design that reflects urban cool. The exhibition will show a selection of process materials from the game such as moving footage and concept art. 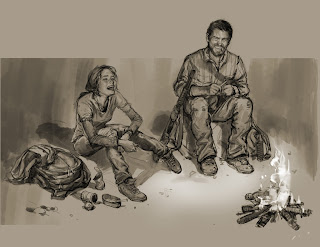 5. Ellie and Joel character sketch from The Last of Us (Naughty Dog), 2013

The exhibition features original character sketches from Naughty Dog’s visually stunning blockbuster The Last of Us. With storytelling and characterisation equivalent to a Hollywood production, this post-apocalyptic blockbuster follows the relationship between companions Ellie and Joel who travel across a ravaged US over the course of a year. This sketch was developed to illustrate the emotional development and dynamic between the lead characters. 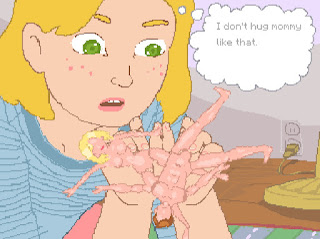 Nina Freeman works with small teams of artists and programmers to make games which often explore sex and relationships. how do you Do It? is a semi-autobiographical game which puts players in the role of a curious 11-year-old girl exploring the idea of sex. Using her dolls as plastic surrogates to investigate, the game allows the audience to understand the discovery of sexuality from the perception of a young girl. It will be playable in the exhibition.

Phone Story is a satirical game for smartphone devices that attempts to provoke a critical reflection on its own technological platform. Footage from Phone Story within the exhibition invites viewers to explore the negative effects of their consumption on people in the globalised world, referring to sensitive subject matters such as child exploitation and worker suicides. It constitutes a series of mini-games that illustrate the stages of coltan extraction in Congo, outsourced labour in China, environmental waste in Pakistan and the Western obsession for gadgets. 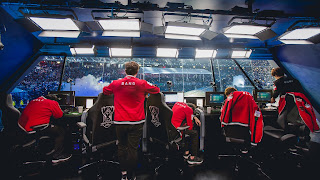 An example of the mass spectacle of esports, (multiplayer games played competitively), the League of Legends World Championships tournament attracts tens of thousands of spectators to watch the professional players in a live atmosphere such as the Bird’s Nest Olympic Stadium as well as a global online audience of millions. Footage from the event will be shown as part of the immersive installation. 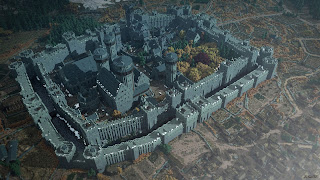 The building of the continent of Westeros from Game of Thrones in Minecraft represents the pinnacle of what is possible to create in virtual communities. Footage will be shown of the vast scale and incredible detail of the engineering and construction created by a dedicated community of hundreds of people working collaboratively to build castles, mountains and cities, block by block. 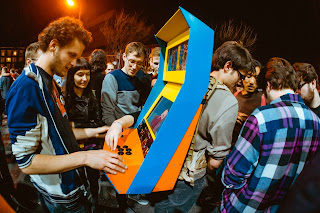 Resembling a miniature replica of an arcade machine, the Arcade Backpack was created to show a rotating selection of independent and experimental video games in surprising settings. The backpack represents the rise of a grassroots DIY arcade scene and has enabled impromptu videogames play in a variety of venues from nightclubs to museums, enabling unexpected social interactions. At regular intervals, visitors will be able to play the backpack which will be roaming around the exhibition.


To coincide with the exhibition, the V&A is inviting applications for a Videogames Residency, from 15 October 2018 – 15 June 2019. The resident will be a UK-based artist, designer or maker involved in the videogames scene who wishes to develop their practice through working with the V&A’s curators and learning team to develop new work and engage with the public.