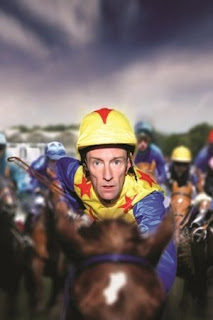 The Citizens Theatre in Glasgow has announced details of the premiere of McLuckie’s Line – a new play about the pitfalls of the acting trade...

Written by playwright Martin Travers and actor Martin Docherty, McLuckie’s Line is a brutally honest monologue packed with humour which delves into the wounded soul of unemployed actor Lawrence McLuckie (played by Docherty).

McLuckie is a compulsive gambler, who we find waiting nervously in a claustrophobic corridor of a Glasgow hospital for the phone call he’s been waiting for his whole life. Recently diagnosed with cancer and unable to take the oppressive silence of waiting with other people dreading treatment: McLuckie reflects on his life, on death, and on what it feels to be working class and talented in a business that is more than ever the domain of the privileged few.

The play, which runs from 25th Apr – 28th Apr in the Citizens Theatre’s Circle Studio, explores important subjects including men's health, loneliness, grief, coming to terms with loss and the will to survive. However, it is also packed with humour: crazy actresses, nosy neighbours, reprobate mates, a wee wren in a housing scheme, a Spanish speaking horse, a gun toting Elvis impersonating bookmaker and a greyhound called Flight Delay.

The writing of the play was inspired by a Brian Cox interview in The Stage where the Dundee born actor said of the class barrier in accessing a career in theatre: “For someone like me, starting now would have been virtually impossible.”

Writer Martin Travers explained the salience of McLuckie’s Line for an industry in which many struggle to make ends meet.

“Actors are lucky if they work six months of the year. The play opens up the world of an actor as he struggles with himself and coping with not working. This will ring true to every actor who has ever acted. I’m not sure how much audiences realise the mental strength and grind that goes into giving a brilliant performance night after night.

“Most theatre actors can only make about £15,000 in a good year, most playwrights and directors scrape by on the breadline. But it’s our cultural responsibility to allow them to make more work, and to learn to get better at what they do, to entertain better and connect with people on a deeper level. The fear is that theatre becomes a middle class plaything like it was before the 1960s.”

“McLuckie’s Line is something of a love letter to Scottish theatre and it’s been so rewarding to feel that we’ve given every working class actor a voice on stage, in order to let the world know that if we don’t start looking after them, we’ll lose them.”

£1.00 from every ticket will be donated to MacMillan Cancer Support. On Wednesday 25 April

Tickets are available from the Citizens Theatre’s website citz.co.uk or by calling the Box Office on 0141 429 0022 and the play heads to Edinburgh's Assembly Roxy on 29th September.
Email ThisBlogThis!Share to TwitterShare to Facebook