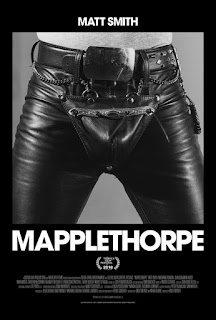 A new bio-pic about the photographer Robert Mapplethorpe is currently crowdfunding...

Matt Smith plays Mapplethorpe and the film charts his life from 1967, when the photographer took up residence with musician Patti Smith at the Chelsea Hotel in New York throughout his highly controversial personal life and career until his untimely death from AIDS at the age of only 42 in 1989.

Ondi Timoner directed the film from a script by co-written with Mikko Alanne and it is co-produced by Eliza & Nate Dushku alongside Timoner and Richard J Bosner.

Mapplethorpe has already premiered at Tribeca Film Festival but that is not the finished product as the current crowdfunder is looking for money to complete the post-production, music licensing and period visual effects. As the Dushkus explain on the crowdfunding page, "We still want every single moment of this movie to be perfect which is almost impossible on an indie budget shooting in New York City on film. However, we are determined to surround the incredible acting and cinematography with a soundtrack and visuals that it deserves. Every dollar we raise through this campaign is going directly towards the budget."

So, what do you get for your money? As well as being able to pre-order the film itself as a digital download or on DVD/Blu-ray you can get exclusive behind the scenes updates, the script of the film, signed photos and posters, leather ties, tote bags and bracelet cuffs. You can even buy a "follow" from Eliza Dushku on Twitter! For the collectors among you there are chances to own costumes and props used in the film or you can get your name in the film credits with special thanks or even as an executive producer.

Find out more and support the crowd-funder on IndieGoGo at https://igg.me/at/mapplethorpe/x