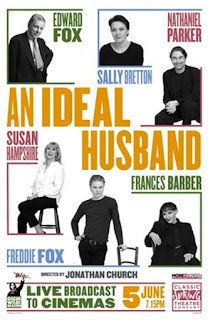 Hot on the heels of Lady Windermere's Fan, More2Screen announces the live cinema broadcast across the country of Oscar Wilde’s An Ideal Husband in June...

This is the third play in the Classic Spring Theatre Company’s year-long Oscar Wilde Season at the Vaudeville Theatre and will be broadcast live by satellite to 420 cinemas across the UK and Ireland on Tuesday 5th June 2018, 7.15pm..

In March the live broadcast of Lady Windermere’s Fan scored a hit at the box office and with cinema audiences around the UK and Ireland, as well as further afield in Gibraltar, Germany and Malta. Each play from the Oscar Wilde Season is reaching a global audience with cinema screenings of the filmed productions in countries around the world, including Australia, Canada, India, Russia and the US, demonstrating the Victorian playwright’s enduring appeal.

More2Screen will also broadcast the final production of Classic Spring’s Oscar Wilde Season from the Vaudeville Theatre to cinemas nationwide: The Importance of Being Earnest on Tuesday 9 October.

Cinema tickets for the season are now on sale at OscarWildeCinema.com
Email ThisBlogThis!Share to TwitterShare to Facebook