News - Europe and the world: a symphony of cultures 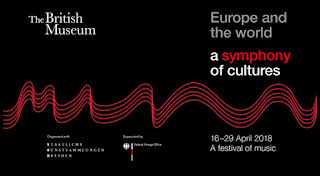 Starting today, and for the first time the British Museum with the support of the German Foreign Office, is opening up its galleries to host a major two-week festival of musical performance...

Taking place from 16th – 29th April 2018, 'Europe and the world: a symphony of cultures' will explore Europe’s interactions with the world and will strive to allow a dialogue between works of classical and contemporary music and the British Museum’s extraordinary objects from all over the world. In doing so the festival will contribute to a better understanding of both the role of the encyclopaedic museum and the evolving relationship between Europe and the World.

Over two weeks the festival will feature seventeen different performances, some accompanied by panel discussions. Programmed by Artistic Director Daniel Kühnel, Director of the Hamburg Symphony, the programming follows on from a series of performative music festivals and panel discussions that took place in major museums in Jerusalem and Dresden.

The festival includes works by European composers, some of them musical pioneers of the twentieth century, whose challenging approach draws attention to ways in which the cultures of Europe have interacted with the cultures of the world. It also places musical performances in gallery environments that invite visitors to perceive synergies between cultures, across centuries, creating living encounters and echoing encounters of the past.

Works by composers including Ligeti, Berio, Stockhausen, Liszt, Messiaen, Strauss, Bartók, and Nono, will be featured alongside performances devoted to historic musical traditions from different parts of the world, including medieval temple music from China, classical music from India, Spanish colonial and flamenco music, Spiritual Japanese music from the 7th century and Byzantine choral music.

The festival will provide a huge variety of musical experiences across the Museum’s galleries, featuring bold and challenging concerts which invite audiences to consider the collections in a new light. Performances will see different art forms juxtaposed with their surroundings, such as an evening of Japanese orchestral music from the 7th century - which was first heard at the Imperial Court in Kyoto and follows strict ceremonial rules - among the imposing stone sculptures of Ancient Egypt. Panel discussions will explore the role of museums in complex political times, continuing themes initiated in an international symposium held in Dresden in September 2017. As a Museum of world cultures, where the whole of human history can be explored under one roof, The British Museum is uniquely placed to host this festival as it enables visitors to experience encounters between one culture and another, and to explore contemporary questions within a historical context.

The festival is generously supported by the Federal Foreign Office of the Federal Republic of Germany.

Hartwig Fischer, Director of the British Museum said, ‘Europe and the world hopes to encourage listening – to others, to ourselves and to the great symphony of cultures represented by the British Museum. With the generous support of the German Foreign Office, these performances will look at the role of Europe, and its relationship with the world. The universality of music reveals connections between cultures across the globe and allows us to explore our shared humanity through the British Museum’s collection. This programming is a new departure for the Museum. As we think about the longer-term uses of the site at Bloomsbury, we can use music to find new ways to explore the spaces that our visitors see each day.’

Daniel Kühnel, Artistic Director of the festival added that ‘The world collections of the British Museum provide extraordinary opportunities for musical performance. Here the material inheritance of the world’s cultures is stored and deciphered, and we are invited to interpret the ways that regions and peoples assert their identities - an endless and urgent task. Here we can use music and performance to tell stories, explore new ideas in a historic setting and explore encounters between cultures. This festival continues the work done in Jerusalem and Dresden exploring paths towards a European identity shaped by a new openness to the world at large.’

Organised by the British Museum and the Staatliche Kunstsammlungen Dresden and supported by the Federal Foreign Office of the Federal Republic of Germany.

Tickets on sale at: http://www.britishmuseum.org/whats_on/europe_and_the_world.aspx

and see the full list of events at http://www.britishmuseum.org/whats_on/europe_and_the_world/events.aspx