Feature - Sonnet of the Day 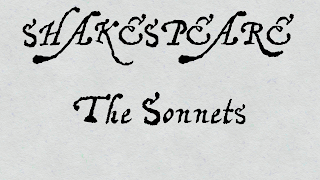 It's Shakespeare's birth/death day today and Susan Omand goes all rhymey-wimey trying to explain what a sonnet is...

Did you know that Shakespeare wrote poetry? No I don’t just mean the rhyming couplets that inhabit some of his plays, I mean actual structured poetry – his Sonnets. And he didn’t just write one or two of them, there are 154 of them altogether, the first of which was published in 1599, so I thought they deserved a bit of an airing on a day when his work is being celebrated. It’s ok, I promise it won’t be like learning about poems, or Shakespeare, in school, give it a go, I’ll be gentle.

What actually is “a Sonnet”? It’s a form of poetry that has 14 lines and a recognisable rhyming scheme which means that the ends of certain lines have the same sound. Most of Shakespeare’s sonnets rhymed the lines in this order a,b,a,b,c,d,c,d,e,f,e,f,g,g. If I give you an example, this is Sonnet 65, you can see where the rhymes are; where A rhymes with A, B rhymes with B and so on.

I realise that by now several of you have recoiled in horror and yet more are making polite excuses and are sidling towards the exit door and that’s OK. Shakespeare isn’t for everyone. For those of you brave enough to continue let’s have a look at what makes the language so scary. The sonnet above is written in what passes now for the English alphabet but did you know there are at least 12 letters of the alphabet as it was in the 1500’s that are no longer used? It’s because of these letters that old manuscripts make the lower case letter ‘s’ look like an ‘f’ (it’s called a long S and was used by printers at the beginning or middle of words but never at the end), overuse the letter e by adding it to the end of nearly every word unnecessarily and why the word ‘The’ is now always translated as Ye. The Y in Ye, by ye way, is actually a representation of the old letter Thorn, which looked like a loopy ‘y’ but was pronounced as a ‘th’ sound – so Ye as in Ye Olde Worlde has always been pronounced The. You also have to remember with Shakespearean language that the words themselves are old and, in the same way that poetry today is often written in the more flowery language of an earlier century, the same is true with Shakespeare, who called upon language from the mediaeval period. I’ll always remember though how our English teacher at school managed to engage a class of 15 year old boys with Shakespeare by pointing out all the crude words in his writing.

But back to the Sonnets themselves. Taken as a whole, the majority are addressed to a young man, perhaps Shakespeare himself, with only the final 28 being addressed to a “dark woman” with whom it seems he had a torrid and perhaps unrequited infatuation. All the early sonnets seem to impart wisdom or advice on dealing with emotions, looking for beauty in all things and the mortality of getting older, things that are all still relevant today and advice that one would indeed want to pass on to one’s younger self. It is, however, the later sonnets about, and to, the Dark Woman that I enjoy the most as you can see the outpouring of adoration turning to vitriolic criticism as his advances are spurned. Not the most flattering description of her though...

My mistress' eyes are nothing like the sun;
Coral is far more red, than her lips red:
If snow be white, why then her breasts are dun;
If hairs be wires, black wires grow on her head.
I have seen roses damasked, red and white,
But no such roses see I in her cheeks;
And in some perfumes is there more delight
Than in the breath that from my mistress reeks.
I love to hear her speak, yet well I know
That music hath a far more pleasing sound:
I grant I never saw a goddess go,
My mistress, when she walks, treads on the ground:
And yet by heaven, I think my love as rare,
As any she belied with false compare.


Find all the sonnets, and lots more information at http://www.shakespeares-sonnets.com/sonnet/index.php

First published on The DreamCage