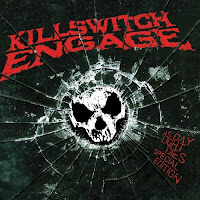 In an effort to further her musical education, Susan Omand has been set "homework" of listening to albums released after the 1980s that she has missed out on. This time it's the much heralded turn of Killswitch Engage...

What is it with all these RAAAAAAAAR singers? At the risk of sounding like my mother “that boy is going to hurt his voice if he keeps on singing like that.” Seriously though, why do it? Especially when there is plenty evidence on As Daylight Dies that the guy can actually sing and has an excellent voice. All the RAAAR stuff does is make the lyrics unintelligible and spoil what is essentially a fantastic metal album.

Take the track Unbroken for example. Musically it is incredible with modern classical atonalism and almost jazz-like key and tempo changes meaning it ticks a lot of boxes for me. It’s just when Howard Jones (no, not 80’s idol Howard Jones, I checked) starts to holler over it that it goes wrong for me. I’m not saying he shouldn’t be loud, over course he should – a lot of the great metal bands of the 70’s had excellent screamers in – but at least make an effort with diction and pitch as the volume increases. Because, as I say, when he does start properly singing, he is very good. There are snippets of  The Arms of Sorrow and For You, indeed on most of the tracks, that are highly melodic and show off his voice really well.

Okay, enough of the RAAARRanting. Ignoring the vocals, this is a superb album. Rhythmically tight with an excellent backline of co-founding members Mike D’Antonio on bass and rhythm guitarist Joel Stroetzel alongside more recent drummer Justin Foley (see? I’ve done some studying,) I was mentally headbanging to a lot of the tracks. Musically too, there’s a lot of interest here, with the other original bandmember, lead guitarist Adam Dutkiewicz, resisting the temptation to do all the fiddly-widdly showing off of guitar style over substance stuff that is often prevalent in rock bands, with his solos all being clean and crisp work that definitely showcase his skill. And the lyrics, when you can understand them, or go looking for a written version as I did on several occasions, are intelligent to the point of intellectualism so they need to be properly heard. (Okay, okay I’ll shut up about the vocals now, honest).

Favourite track (ignoring the RAARing) is one which seems to be only on the special edition album, and that is Let the Bridges Burn, which has one of the most attention-grabbing intros that I’ve heard for a while. But I must also mention the final track on the special edition. I said above about the excellent screamers in 1970’s metal bands and those bands don’t come much greater than Dio. So a cover version of Holy Diver was always going to be an interesting one for me. It’s good, I’ll give it that, but by God (pun intended) NOBODY can do Ronnie James like Ronnie James did.

Overall then, have I been educated this time out? Yes, I think so. I know what I don’t like in the style of music but I can get past it (mostly) to enjoy the bits that I do like. Will I listen to Killswitch Engage again? Surprisingly, probably yes, because the line-up changes have been frequent and I want to see what the difference is, both at the point where Dutkiewicz switched from drums to lead guitar, which feels to me to be a radical move, and also to see what kind of a difference having their original singer back means. So further investigation is planned. I shall report back.