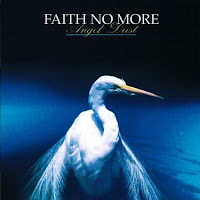 In an effort to further her musical education, Susan Omand has been set "homework" of listening to albums released after the 1980s that she has missed out on. This time she discovers she's done her homework early for once ...

Guess what? I OWN THIS ALBUM! Yes, really and, what’s more, I bought it around the time it was released, going for the 1993 re-issue in order to get the cover version of The Commodores’ Easy, because I adored the song at the time (and Mike Patton’s voice is superb – his “oooh” just before the guitar break still makes me go all inappropriate) but I loved the rest of the album as soon as I heard it – FNM is one of very few American rock bands that I listened to in the early 90s (others were GNR, Chilis and, on bad days, REM) so I was really pleased to see them pop up on my “Educating” list.

So what of the rest of Angel Dust as an album?

Quite apart from Mike Patton’s superb vocals (which are superb, did I mention?) this is a fantastic album and not at all what you’d expect from FNM, given their earlier work. Sample heavy, there’s an almost concept feel as certain sounds (like the circus/fairground organ and the use of tribal chanting) run through the various tracks on the album and it paints so many images in my head. Land of Sunshine and Caffeine bring to mind images like the Edward Hopper painting Nighthawks – loneliness and an almost observational quality of life going on around you. Midlife Crisis has echoes of the synth riff in Karel Fialka’s hit Hey Matthew so that image of father and son watching TV comes to mind there. There’s a lilting music-box quality to the start of RV that conjures carousel horses and those scary clown games where you feed ping pong balls into their mouths and the story-telling vocals remind me of Nillson’s The Point which, in itself, was a weird album but that’s a story for another day. Smaller and Smaller surprises with its native American fire chanting being mixed into the middle of a serious “night-time graveyards” gothic feel to give a song that leaves me seriously un-nerved but the mood is, ironically, lightened with the interesting piano in Everything’s Ruined. There’s an industrial edge to Malpractice that the feedback-loop guitar and almost Hitchcock-like orchestration add real depth to, highlighted even more by the totally unexpected flip to light melodies and sewn together with an amazing middle-eastern undercurrent. From there it’s full on 80’s synth for Kindergarten and a great use of distorted bull-horn samples, then chilling chanting children and a theatrically Nosferatu-esque church organ in Be Aggressive. From chilling to chillin’ and the easy listening rhythm of A Small Victory. Crackly radios and air-raid sirens, counterpointed by the strong march rhythm of military rallies, evoke the right atmosphere for Crack Hitler and Jizzlobber is out and out swamp-thing horror leading to religious redemption. That brings us to the final two tracks, the cover songs on the album with their instrumental version of the Midnight Cowboy being, to my mind, so much more fitting to the film than the original.

So a multi-layered and highly complex album of huge contrast and incredible experimentation that I loved, and still love, from a band that, up until this release, had not really put a blip on my radar. I went digging at the time to see what their other music was like and, in the main, I was disappointed by their back-catalogue which, although I liked the odd track, all sounds a bit “samey” and lacked the artistic flair of Angel Dust as a whole album.