Turn That Noise Down - Prefab Sprout 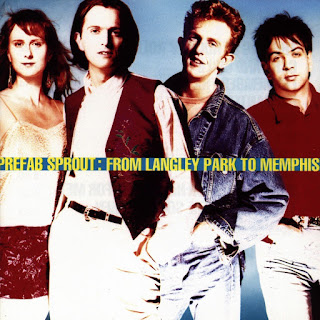 So many well-known albums turn 30 this year and Steve Taylor-Bryant and Susan Omand travel back to 1988 to revisit some of the sounds of their youth that made parents shout "Turn that noise down!" This week Susan goes From Langley Park to Memphis ...

They don’t write songs like they used to, do they? The King of Rock and Roll was the big commercial hit for Prefab Sprout and is the first track on this, their third album, and it’s still a real floor filler at 80s club nights (I am reliably informed). It’s also one of FIVE singles that were released from the ten tracks available on the album, although, I must admit, I only really remembered one other as a single and that’s Cars and Girls. However, I must start with an apology to the band. Somewhere in the last 30 years I got it into my head that they were from Glasgow, along with the likes of Deacon Blue, Simple Minds, Hue & Cry, Love & Money et al, probably because they were around at much the same time and were part of that kind of sound. But they’re not Weegies. They’re from Co Durham. Oops, sorry!

It’s been a good while since I played the whole of From Langley Park end to end and, digging it out again this week, I realised I had forgotten what an eclectic mix of styles is on here. From the tap-along reggae flavour of Knock on Wood (no, not a cover of the disco hit) to the wonderful late-night jazz bar feel of I Remember That there’s not a bad track on the list. I found myself humming along to most of it, even the songs I didn’t know that well, although my head decided that Golden Calf was too much like ELOs Hold on Tight (not a bad thing) for me to not sing the wrong words, in French of course. And a little bit of research threw up a couple of very famous cameos on the album too, with The Who’s Pete Townshend doing the acoustic guitar on Hey Manhattan and the track Nightingales features harmonica played by none other than Stevie Wonder. It’s no wonder then (pun intended) this album is so good if it can attract session musicians like them.

But it’s the first track that will always be my favourite of theirs and the one that instantly comes to mind when Prefab Sprout are mentioned and that’s before we get to the totally surreal video featuring singing statues, froggy butlers and hotdogs dancing by the pool. But that’s just one song on a clever album from a very clever, and much under-rated, band. Remind yourselves of their work and dance.