Turn That Noise Down - Bros 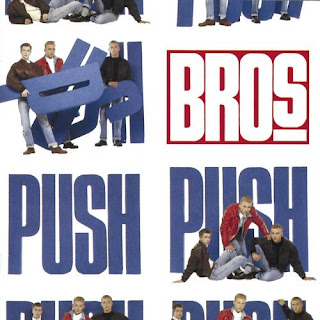 So many well-known albums turn 30 this year and Steve Taylor-Bryant and Susan Omand travel back to 1988 to revisit some of the sounds of their youth that made parents shout "Turn that noise down!" This week Steve drops the boy for the Bros album Push...

I’ve been looking forward to listening to 1988’s Bros album possibly more than a man of nearly 43 should be. There’s no point in any of us that grew up in the 1980’s pretending the music was awful, we bought into it more than any other generation. We are the reason MTV was invented, later generations are the reason they no longer play music on it. We are the reason Top of the Pops stayed on as long as it did, prison sentences may be responsible for its demise in the main but I believe that people just stopped listening to music in the numbers they used to. We are the generation that invented Now That’s What I Call Music, we are the generation that have made 80’s Nights a thing in seedy clubs. We loved the cheesiness, we love the electrosynthpoppiness, we loved the pretty people, and we loved Grolsch tops as footwear decorations more than anyone else from any other era. Which leads me to Bros. The brothers Goss and school pal Craig Logan hit the charts and hit the charts hard, they took over the world in a way that only Duran Duran had managed 8 years earlier and only really Take That have got anywhere near since. They had pop lyrics, they had dance beats, they had a little funk, and with Matt’s distinctive throat growling vocal style they had us hooked.

Push contained tune after tune of 80’s gold, from When Will I Be Famous at the start and its rather daft mention of Karl Marx, through Drop the Boy, and I Owe You Nothing there was manufactured hit after manufactured hit, much pop delights for both genders to appreciate, and they could show a softer side with the incredible Cat Among the Pigeons. It’s elsewhere in the album though that as an older fan I find joy. Ten Out of Ten, Liar, Love to Hate You are great album fillers and potential singles in their own right, whilst I Quit is sublime and I imagine would have been quite epic to see live. It’s a Jungle Out There was unfortunately not a cover of the Monk theme but still pretty good and Shocked was as eighties as any song ever written.

Global domination though was short lived and illness led to Craig Logan leaving the band after Push and becoming a songwriter and music management expert working with the likes of Tina Turner and Cher. The brothers had relative success on their own, Matt still within the music industry and Luke as an actor, who was really decent in Blade II.

Push doesn’t hold up in any way imaginable as it was, rightly so, very of its time but that doesn’t mean you can’t still enjoy it. If you don’t mind going back in your mind to that time then the songs sound as fresh as they did then. Go on, you know you want too, ‘You’ve read Karl Marx, and you’ve taught yourself to dance, you’re the best by far’.