Review - The Key to Dali 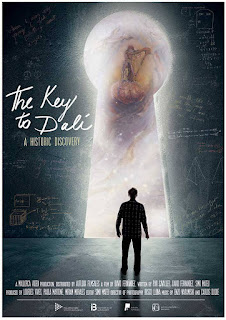 Susan Omand indulges her love of maths, myths and mysteries in one art documentary as she discovers The Key to Dali...

Had it been about any other artist I may have not been so eager to watch a feature length, subtitled documentary but Salvador Dali has always fascinated me, both as an artist and as a person. The eccentricity displayed in public, the depth of symbolism in his paintings, all point to a highly complex character. It was my father that introduced me to Dali’s work when I was very young and it was he who started off my own small collection of enigmatic Dali prints, so I was keen to see if, as the documentary title claimed, someone has indeed found The Key to Dali.

The documentary follows Tomeu L’amo as he recounts a journey that spans over a quarter of a century, cost him a lot of money and a lot of his mental and physical health, as he strove to prove the authenticity of a painting that he bought in a small Girona antique shop in the late 1980s for 25,000 Spanish pesetas (about £130 today) as being an early Dali. The oil painting depicts an angel playing a harp, emerging from what could be a fireball of reds, oranges and bluish yellows but it was the inscription, very faintly written in the corner in black ink, that created a lot of the problems. It read (translated) To my beloved teacher on the day of his birth, with a date of 27-IX-96 and the name Dali. The date caused so many acknowledged experts to dismiss the painting out of hand, as Dali was not even born in 1896, but Tomeu was so determined that his gut feeling was right and this WAS a Dali original, that he set out to gather enough evidence to prove it, no matter what it took.

Over the course of the documentary we hear from a large variety of experts, from conservators to graphologists, about the technical tests that were done. We also hear from journalists, lawyers, historians and art critics, all of whom have their opinions, and we get a step by step through the research that Tomeu himself did, as a keen amateur collector and devotee of Dali’s work. We also get an insight into the life of Dali himself, with clips and quotes, digging deeper into his background and character, using family history, other artworks, even numerology, looking for the inspiration of this painting and its enigmatic inscription if, indeed, this was to be authenticated as the work of Dali. However, there was more to this documentary than just being a fascinating insight into Dali, his character, his art and the technical processes involved in determining the authenticity of a discovered work. This documentary was just as much about Tomeu, his own character, tenacity, artistry and fanaticism. At times portrayed as the empirical scientist that he was to profession, as a biology teacher, alternating with a “fanatical side” which revealed a highly creative and enquiring extrovert whose daily life made him out to be every bit as eccentric as Dali himself – from punk songs in paper hats under the light of a full moon, to jumping frog-like along the floor of the sea-bed, to chasing paper cups along his porch in the wind. It is that representation of duality of character, the left vs right brain, a thing often commented upon by Dali, that leads the viewer, part way through the film, to question whether Tomeu is being as pragmatic as he should be or is he making the evidence he gathers fit the theory, to “make true” that which he believes in so much. Can he convince the experts, and the public at large, that this is indeed a historic Dali discovery through his presentation of unbiased evidence, or is he ignoring the flaws and the nay-sayers because he needs it to be true, otherwise all that time, money, effort and obsession will all have been for nothing?

The presentation of the documentary itself is beautiful and engaging. It benefits a lot from not having a separate presenter/interviewer asking inane questions but letting the people involved tell their own stories. The “science bits” too are not delved into in any great depth but there’s enough information that you can see where they came to their conclusions without getting bogged down in technicalities and I really enjoyed the numerology and code breaking. I wouldn’t say though that it was totally unbiased, as there was little contrary evidence, although much contrary opinion, presented. I always felt that the film-makers were rooting for Tomeu’s story to be true rather than presenting the balanced arguments on authenticity for the viewer to make up their own mind. It felt, in a lot of ways, like a Louis Theroux style of documentary with that same depth of interest in the person whose story is being told. Because, at its heart, this film is not really about the painting, or Dali, it’s not even about art really, it’s the story of Tomeu, of his life and his single-minded, utterly unshakeable belief that he has found his holy grail.

The Key to Dali is coming soon to all major VoD platforms.
Email ThisBlogThis!Share to TwitterShare to Facebook