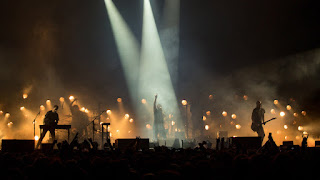 The Hall’s rock heritage stretches back to the 1950s, with its roll call of acts a virtual who’s who of genre titans, from The Beatles, The Rolling Stones and Bob Dylan to Jimi Hendrix, Led Zeppelin and Iggy Pop.

Lucy Noble, Artistic Director at the Royal Albert Hall, said: “We’re delighted to announce the Hall debut of one of the most innovative, influential and important rock acts of recent decades, the incomparable Nine Inch Nails. This career-spanning show will showcase the singular genius of Trent Reznor in a suitably iconic setting.”

Nine Inch Nails achieved worldwide renown in the 1990s for their seminal albums, The Downward Spiral and The Fragile, while their most recent EP, Add Violence, was released to critical acclaim last year. The second in a series of three, it follows December 2016’s Not the Actual Events, with Reznor hinting that a third instalment could be coming later this year.

Listen to Less Than from their latest EP