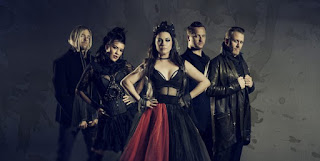 Evanescence's Synthesis Live tour (with full orchestra) kicks off in London at the end of the month...

In what promises to be the biggest year for Evanescence yet, the group’s“Synthesis Live” tour kicks off in the UK with two sold out nights at the Royal Festival Hall on March 30th and 31st. Because of the interest, a NEW London date has been added to the tour with the band returning to the city and Eventim Apollo on April 9th.

Few people in rock music have as unique a voice as Amy Lee. This time, as well as the band, her soulful tone and distinguished sound are accompanied by a live orchestra and electronic programming, conducted by Susie Benchasil Seiter. Amy Lee says “This will be our first time touring with orchestra and I’m so excited to perform this way - really focus on the vocals, and the emotion and the story we’ve built over the years”

Evanescence released Synthesis, their fourth and most ambitious album to date in November last year. The band - lead singer-songwriter and pianist Amy Lee, bassist Tim McCord, drummer Will Hunt, lead guitarist/backing vocalist Troy McLawhorn and guitarist Jen Majura along with producers Will Hunt and orchestra arranger and composer David Campbell reworked classic Evanescence tracks along with two new songs, the first of which is entitled Imperfection (listen to it below). The album includes a guest performance by celebrated violinist Lindsey Stirling on Hi-Lo the other new song on the album.

Amy Lee explains the meaning behind Imperfection, “For me, this is the most important song on the album. It's for all the people we’ve lost, all the people who we could lose, to suicide and depression. I'm singing from the perspective of the person left behind, the person in the waiting room. It’s a plea to fight for your life, to stay. Don't give into the fear- I have to tell myself that every day. Nobody is perfect. We are all imperfect, and it’s precisely those imperfections that make us who we are, and we have to embrace them because there’s so much beauty in those differences. Life is worth fighting for. You are worth fighting for.”


Catch Evanescence on Synthesis Live in the following cities: