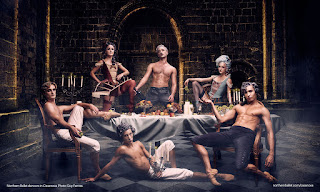 Northern Ballet’s award-winning production of Casanova, a ballet by Kenneth Tindall will be broadcast on TV for the first time on Sunday 1st April...


Acclaimed by critics and audiences, now through this TV screening, even more people will be able to see this sumptuous new production which premièred in March 2017, and was filmed during live performances at Manchester Palace Theatre last summer after completing its World Première Tour. Featuring Giuliano Contadini in the title role with Ayami Miyata as Manon Balletti, Dreda Blow as Bellino and Hannah Bateman as Henriette: Casanova’s love interests, after broadcast, it will be available on digitaltheatre.com, the world’s leading digital platform for the arts.

Transporting audiences to 18th century Venice, Casanova tells the story of the infamous Italian adventurer in a seductive masquerade of passion and politics. Casanova was choreographed and directed by Kenneth Tindall for which he received a nomination for Best Classical Choreography at the 2017 National Dance Awards. The ballet is set to an original score by acclaimed film and television composer Kerry Muzzey and based on the Sunday Times bestselling biography of Casanova by Ian Kelly. It features sumptuous gilded sets and decadent costumes designed by Tony and Olivier award-winning designer Christopher Oram, with wigs and make up designed by Richard Mawbey and lighting designed by Alastair West, for which he was nominated for a Knight of Illumination award.

Northern Ballet’s Artistic Director David Nixon OBE said: ‘Casanova kicked off an extraordinary year for Northern Ballet as the first of three new full-length ballets that we premièred in 2017. We thrive on creating new work and surprising audiences with innovative and unexpected new titles, and Casanova has been an incredible achievement for Kenneth Tindall, the creative team and the whole company. This is our second new full-length ballet to be screened on television in two years, a fantastic platform to enable even more audiences to see Northern Ballet and be taken on a journey, pushing the boundaries of what stories can be told through dance.’

Kenneth Tindall, Choreographer and Director of Casanova added: ‘Casanova was my first full-length ballet to choreograph and direct and I am overwhelmed by the recognition and success it has achieved. I am delighted that we are now able to share Casanova with even more people from the comfort of their own homes through the medium of film which adds a whole new dimension to the work. I hope that they are surprised, shocked and moved as they join us in discovering the fascinating and complex man that Casanova was.’

photography for Casanova taken by Guy Farrow.
Email ThisBlogThis!Share to TwitterShare to Facebook