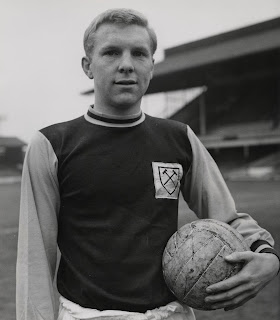 The National Portrait Gallery has acquired a selection of photographs of footballer Bobby Moore...

The portraits are from the collection of his daughter Roberta Moore and are seen together for the first time as part of a new display, Bobby Moore: First Gentleman of English Football (on now until January 2019) to mark this summer’s FIFA World Cup tournament. Moore famously captained the England football team to achieve their first and only World Cup victory, on 30 July 1966, defeating West Germany 4-2 in a tense final at Wembley Stadium.

While the famous image of Moore, lifting the Jules Rimet trophy cemented him as the embodiment of a golden period in English football, these newly acquired vintage press prints provide an insight into both the professional and personal life of one of England’s best-loved sporting heroes on the twenty-fifth anniversary of his death.

The portraits on display date from 1962 when the twenty-one year Moore became captain of West Ham, having joined the club as a ground-staff boy and played his debut for the first team against Manchester United in September 1958.

There is also a photograph showing the footballer meeting young fans before training in east London and a striking image of Moore winning the ball from George Best while playing against Northern Ireland in 1964. Best, who was later his teammate at Fulham remembered that in twenty years of playing against each other, he only got past Moore once.

Several portraits show Moore relaxing off the pitch. These include a Daily Mirror photograph from a family holiday, taken at the peak of his footballing career in 1971 and a photograph by Fulham teammate Les Strong picturing Moore in a communal bath with the Fulham F.C. team. In Moore’s first season for them, the team are seen parodying the popular West Ham anthem, ‘I’m Forever Blowing Bubbles.’

A portrait of Moore with footballer Johnny Byrne jumping in the rain holding umbrellas by Daily Mirror sports photographer Monte Fresco captures the two friends after training, suggesting the increasing public interest in footballers’ lives both on and off the pitch. Byrne joined West Ham in 1962, setting a transfer record of £65,000.

A family picture of Moore with his first wife Tina, c. 1975, whom he married shortly after the 1962 World Cup, five years after meeting his future bride on an East End dance floor, shows football’s golden couple, outside their home in Chigwell, Essex. Photographed with their son Dean and daughter Roberta by Terry O’Neill, they attracted unprecedented media attention. ‘Morlands,’ which hosted many gatherings for footballers and movie stars, cost a rumoured £100,000 to build and included extravagant design features; the Daily Mail ran a feature on the ‘superpad for superstar Bobby Moore’.

Moore’s death from cancer, at the age of fifty-one, Beckenbauer described his former opponent as the ‘best defender in the history of the game’.

Roberta Moore says: ‘My father emanated grace both on and off the pitch. He was self-effacing, kind and humble with a dry humour and tremendous sense of fun. This display is a wonderful tribute to the high esteem in which he is held.'

Dr Nicholas Cullinan, Director, National Portrait Gallery, London, says: ‘Bobby Moore was widely regarded as one of the greatest defenders of all time and an important ambassador for football. It is fitting that in this World Cup year, the National Portrait Gallery honours his achievements with this display. We are grateful to his daughter Roberta for enabling us to acquire these family photographs for our Collection.’

Born in Essex, Robert Frederick Chelsea, Bobby Moore (1941–93) signed his first professional contract with West Ham United at the age of seventeen, and quickly went on to captain the east London club. He made 647 appearances for the team over fifteen years before moving to second division Fulham in 1974.

Moore earned a place in the England squad for the 1962 World Cup in Chile and after only twelve appearances he was named captain. Aged twenty-two, he was the youngest player to captain the team, and the first to lead England to their greatest victory.

While Moore was awarded an OBE in 1967, it took many years for members of the 1966 World Cup team to be further recognised for their achievement. After briefly managing Oxford City and Southend United, Moore worked as Sports Editor for the Sunday Sport, then as a pundit for Capital Gold Radio. He also starred in the Hollywood film Escape to Victory (1981) alongside Sir Michael Caine and Sylvester Stallone.

Considered one of the sport’s best defenders, Moore was a composed and commanding captain with immaculate timing. Moore was regarded as a great gentleman of the game who was known for his intelligence and sportsmanship on the pitch. He became and remains an inspirational hero for a generation of footballers and fans.

The display is curated by Dr Sabina Jaskot-Gill, the National Portrait Gallery’s Associate Curator of Photographs.