News - The Beano at The McMenace Gallery 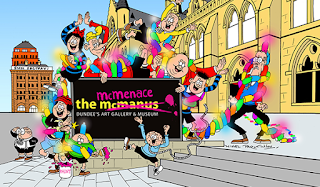 Beano Studios and The McManus: Dundee’s Art Gallery & Museum, are collaborating this summer to create a bespoke exhibition dedicated to the beloved Beano characters and comic...

In Beano’s 80th year, the special collaboration will see The McManus revise their name to ‘The McMenace’, for the duration of the exhibit from the 2nd June – 21st October 2018.

To commemorate the union, Beano comic illustrator Nigel Parkinson, created an original comic strip starring The Bash Street Kids larking about and designing the new sign for The McMenace. The illustration shows The Bash Street Kids tangled in the ‘Waldella, Dundee’ by artist David Batchelor, one of the museum’s most popular exhibits.

The unique exhibition will be a fun look at Beano at 80-years-old, focusing on The Bash Street Kids, whose conception was inspired by pupils at Dundee High School and their playground, just a stone’s throw from DC Thomson Media’s Headquarters at Meadowside in the city.

The showcase will display and explore the birth of the Beano comic and show how it has developed throughout the ages. It will also look at the introduction of some of the funniest and most loved characters - Dennis and Gnasher, Rodger the Dodger, Minnie the Minx and of course The Bash Street Kids, with their characteristic slapstick humour.

Representation of the golden age of comics can be seen in the form of The Dandy and The Hotspur, which entertained the nation’s children on a weekly basis by writers and artists from DC Thomson Media.

Sinclair Aitken, Chair of Leisure & Culture Dundee said “We think that the Beano’s 80th is an outstanding achievement, its influence shows the test of time as it is still so incredibly popular with children today. We can’t wait to celebrate the birthday of this comic in its hometown. They have created so many iconic characters through the years from Dennis and Gnasher, Minnie the Minx to the fantastic Bash Street Kids.

This exhibition is a very special collaboration between ourselves and Beano Studios and we look forward to welcoming visitors of all generations from near and far, when the exhibit opens in early June.”

Mike Stirling, Head of Beano Studios Scotland, added “Dundee is the hometown of The Dandy and Beano, and so for us, there is no better partner than The McManus to celebrate our 80th milestone with. The exhibit will offer fans a glimpse into the history of the comics, and showcase the rebellious and fun characters of the comics throughout the ages and display how they still connect with children today.”