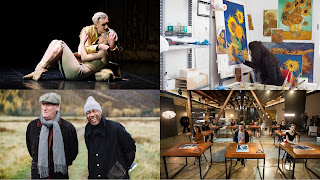 The highlights of the spring schedule on Sky Arts...

All too often we complain about there not being enough arts related programmes on TV. We can't all get into the big cities to see art exhibitions and talks, go to concerts or visit the ballet so now and then it's nice to be able to find these things on our tellyboxes at home. Over the next few months, Sky Arts has something for everyone with a wide range of new productions, spanning the worlds of art, music, photography and dance.

In Mystery of the Lost Paintings, art lovers will get to explore the stories behind several missing masterpieces which have been stolen or destroyed. The seven-part documentary series will also see these great paintings painstakingly recreated and brought back to life.

Meanwhile celebrity art enthusiasts including Billy Connolly, Helena Bonham Carter and Jeremy Paxman, join art historian Gus Casely-Hayford for a second series of Tate Britain’s Great Art Walks to explore the landscapes and places that inspired of some of the most loved paintings hanging in Tate Britain.

For music lovers there is Generation Grime, a compelling documentary unravelling the history of grime music which features interviews with some the industry’s most inspiring artists, including Dizzee Rascal, Wretch 32 and Tinie Tempah.

Master of Photography, returns for a third series with photographers from across Europe competing in a range of tasks to become the next Sky Arts Master of Photography and there will also be an exclusive TV broadcast of Northern Ballet’s Casanova, choreographed by Kenneth Tindall.

Director of Sky Arts, Philip Edgar-Jones comments: “Spring has truly sprung on Sky Arts as we continue to offer our viewers an exciting and diverse range of programmes over the next few months. As the UK’s only dedicated arts channel, I am proud that we have something for everyone whatever their passion. Whether it’s getting under the skin of Grime, learning something new from some of the world’s best photographers through to uncovering of some of the world’s great lost paintings.”


Filmed and produced exclusively for Sky Arts by Digital Theatre, this production unmasks history’s most fêted libertine Giacomo Casanova’s hedonistic adventures in choreographer Kenneth Tindall’s first full-length ballet. Played live by Northern Ballet Sinfonia, the custom score is from Kerry Muzzey and designs are from the Tony and Olivier award-winning Christopher Oram. Written by Kenneth Tindall and Ian Kelly. Sky Arts presents in association with Digital Theatre and Northern Ballet. After it's broadcast, the production will also be available on digitaltheatre.com

The six-part series makes a welcome return with an all-star line-up including Billy Connolly, Helena Bonham Carter and Jeremy Paxman, joining art historian Gus Casely Hayford on a series of intimate, funny and very moving journeys into the scenes of Britain's most loved places and paintings. Stunning locations and surprising banter through the Lake District, Cotswolds, Southern Downs and the Scottish Highlands - what more could you want?

Mystery of the Lost Paintings: Wednesday 2nd May at 8pm

A seven-part series of documentaries each telling the story of a great painting now tragically lost. Some were stolen, others destroyed; some by accident and others on purpose. The series brings to life the missing paintings and the artists who made them, documenting the disappearance or destruction and thrillingly observing the process by which these masterpieces are being brought back to life by Madrid based company Factum Arte, an organisation with an international reputation for its team of artists, technicians and conservators working both with digital and traditional mediums.

Paintings which are explored and recreated include; a 17th-century Jan Vermeer masterpiece, one of Van Gogh’s four iconic paintings of sunflowers, an epic Monet water lily canvas, Graham Sutherland’s portrait of Churchill and a controversial Gustav Klimt work.

This compelling documentary explores the history of Grime music and the social transformation that the culture has undergone, from its early birth out of the dancehall, D&B and Garage scenes, to its roller coaster relationship with mainstream media and the establishment. The short-film honours those who have built the culture and documents what has taken place over the last two decades in the quest for creative freedom and true independence. The documentary includes interviews with; Dizzee Rascal, Wretch 32, Tinie Tempah, JME, Wiley, Devlin, Jammer, Shystie, Lethal Bizzle, and Jamal Edwards. Produced by Renowned Films under executive producer Duane Jones

Master of Photography 3: Tuesday 29th May at 8pm

Master of Photography returns for series three as Sky Arts launches a fresh search for Europe's best photographer. This unique competition follows 10 photographers over eight weeks as they travel around Europe and tackle a series of challenges testing their ability, skill and instinct across a range of styles. Joining Oliviero Toscani on the judging panel this year is curator Mark Sealy MBE and Elisabeth Biondi, visuals editor of The New Yorker magazine, each of whom will test the contestants’ versatility and talent along with international leading photographers and industry experts.
Image & info -Sky Arts
Email ThisBlogThis!Share to TwitterShare to Facebook