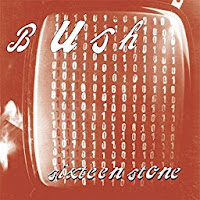 In an effort to further her musical education, Susan Omand has been set "homework" of listening to albums released after the 1980s that she has missed out on. This time she's got a Sixteen Stone Bush... no, wait, that's not right...

What? Oh, NOT Kate Bush. Just Bush? Hmmm, ok then. Bush. I’ve vaguely heard of them but wouldn’t know any of their work. I’ve definitely not listened to any on purpose. Until now.

Yes the next album on my educational list is Sixteen Stone by Bush. Twelve tracks, nothing much in my memory from… *checks date*… 1994 to compare them to and no preconceived ideas about what to expect so let’s go track by track shall we?

Everything Zen – love the guitar intro. The verse is a bit monotonous though isn’t it? I mean in the way that it’s all sung on one note (a mono tone) not that it’s necessarily boring. This kinda reminds me of U2 after they stopped being cool. That’s not really a bad thing, I went to a few post-Joshua Tree gigs of theirs and they weren’t bad, just not excellent. So, yeah, listenable… and maybe a bit boring.

Swim – This intro has early Nirvana written all over it. Reminds me a lot of Heart Shaped Box for some reason. I do like the bass though (you can blame the fact I went with a bass player when at a formative age for the fact I pick out basslines before most other things in guitar heavy bands) and my head did bob slightly, if not full-on bang. Nicely discordant.

Bomb – Ah. Right. The Nirvana rip off must be the sound this lot go for – or is that just generic grunge? It’s not bad anyway if a bit samey. Maybe they’re better live? I can see a decent mosh pit with the chorus.

Little Things – Should I have heard of this one? There’s something familiar about it. *Googles* Ah right, it was actually a single in 1995 so I guess I heard it on the radio back in the day. They do sound like they’re trying a bit too hard with this one though, the dissonant guitar feedback doesn’t work quite so well and feels a bit shoe-horned in to the song just to “get the sound” rather than working with the melody like it did in previous tracks.

Comedown – More tasty bassline, good drums and I like the build of the lead guitars on this. Definitely more melody in the vocals this time too. I’m really not that bothered about his voice though – it’s not that memorable for me (sorry to people who like it). It doesn’t grate or annoy but it doesn’t stand out as special in any way either. Otherwise, this is probably my favourite track on the album. Unless I change my mind.

Body – Oh hang on... Oh, ok nevermind (unintentional Nirvana pun there). LOVED the intro – the guitar work smacks of early Zeppelin/ Sabbath but then it all becomes a bit meh once it gets going. It’s the voice I think, for me it’s not strong enough. I’m listening to classic rock guitars and not getting the screaming metal voice that I expect.

Machinehead – Oh, now this is different. I like the processed vocals at the start and I must admit the voice fits better with the rest of the song too. It’s not trying to be anything else (at least in my head) so it works better. It’s a lot more alternative than grunge too – Wheatus-ish with added fancy sound effects.

Testosterone – This one benefits from listening on headphones. There’s a lot going on in the background that you miss out on just listening on speakers. Interesting layers on the guitars underneath the general “vwoom” of the over-riding lead. Otherwise though we’re back to Led Zep backing without the tidiness of Robert Plant’s vocals.

Monkey – if it wasn’t for the muddy guitars, I’d swear this was Blur. It’s very Song 2 isn’t it? (*ducks*) But I do like the guitar work on here, again this is another one where the dissonance works in their favour.

Glycerine – Ooooh the pop classic chord combo (I, V, vi, & IV) TBH I’m surprised I haven’t heard it before on the album but it’s so obvious on this track that even the added interest of strings can’t detract from it and it’s all I hear. Which is a pity because the strings really are interesting and it could have been a good track.

Alien – Finally! Something a little different. This will be the ballad of the album I guess. It even has the “stand up from the stool” key change in the middle. Dat long note at the end tho’ (to use the vernacular.)

X-Girlfriend – Why can’t the whole album sound like this? Proper punk backing that is so Sid Vicious it hurts (as long as you ignore the singing – so… never mind the vocals it’s the Sex Pistols?)

Aaaaand we’re done. I have now listened to Bush deliberately. Would I do so again? Surprisingly maybe yes I would. I’d have to be in the right mood for it and try to get past the “not rock/metal enough” voice though. Talking of voice, looking back over my notes above, I notice I haven’t mentioned anything about the lyrics. That kinda proves to me that Gavin Rossdale weren’t as front and centre as he needed to be because it should be that that holds the attention rather than the backing. I may have to give some of their other work a try just for that reason because he’s probably meant to be a good singer (being a some-time judge on The Voice and all – according to Steve anyway.) So consider me educated and we’ll put this one in the Maybe pile.