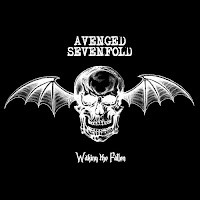 In an effort to further her musical education, Susan Omand has been set "homework" of listening to albums released after the 1980s that she has missed out on. This time she's Waking the Fallen with Avenged Sevenfold...

I’ve been listening to Waking the Fallen by Avenged Sevenfold on repeat for pretty much three weeks now. “Wow!” I can hear you cry, “you must really love it!” Erm… no. I don’t love it. But I don’t hate it either. The thing is, I don’t actually get it. I’ve been playing it over and over (and over and over, believe me it really has been three weeks of only listening to this for music entertainment) and… nothing. It’s not even that I find it boring or wallpapery, it’s just not sinking in at all and I’m utterly confused by this.

Yes, a lot of the tracks are the “thunka thunka raaaar” style that I mentioned with Linkin Park but there seems to be some OK bits too, just not as OK as the Linkin Park OK bits. I wrote down, in one of my many run throughs trying to take notes for a coherent review, that the track Remenissions has some vaguely melodic bits with not bad singing and nice-ish guitars but that was all I wrote down. For the whole album. Ah. So I tried to tackle the album another way, by analysing some of the tracks musically to see if I could break the shell of it that way. Nope. It’s all very much the same, knackeringly manic drums holding up a wall-of-noise bassline with wannabe 70s prog-rock 5 minute epic widdly guitar solos and monotonous roared choruses, interspersed with softer “look we’re not the dangerous psychopaths your mother thinks we are” emo verses that, for some reason, reminded me of Eurotrash – there may be some repressed memories in there somewhere, I dunno.

So that didn’t work. What if I tried watching some videos, to see if “the live experience” could shed some light on the album? Oh. OK I wasn’t really expecting them to look like that so that’s something. They don’t actually look that scary. The rhythm guitarist is trying to be Billy Joe out of Green Day in a white shirt and a bow tie (bow-ties are cool btw), the bass guitarist has an excellent radioactive yellow Mohican and I can probably forgive the lead guitarist for anything because he looks like Sid Vicious in guy-liner, so there’s that. With a drummer that we couldn’t really see through the mist of sweat and the blur of multiple flailing limbs and a front-man that looks like Paul Teutul Jr, that seems to be the band. Does that help? No, not really.

So, yeah, I’m afraid Avenged Sevenfold are the integral calculus of bands for me. At some point I hope that, through aeons of staring blankly at their incomprehensibleness, somewhere a lightbulb will randomly ping on (like it did with calculus… just AFTER the maths exam) and I will suddenly understand at least something of the album, enough to appreciate if not enjoy. But until then, I wait for my time sacrifice to be Avenged. Sevenfold.

See what I did there?

I'd written the above article and had it all ready to publish when something happened. I clicked on an Avenged Sevenfold video that got put on YouTube just a couple of months ago - an acoustic cover of my absolute favourite Jagger/Richards track As Tears Go By recorded for a live EP at The Grammy's Museum just before Christmas. The lightbulb has come on. I love this.