Turn That Noise Down - Zodiac Mindwarp 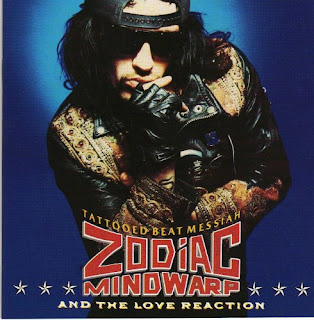 So many well-known albums turn 30 this year and Steve Taylor-Bryant and Susan Omand travel back to 1988 to revisit some of the sounds of their youth that made parents shout "Turn that noise down!" This week Susan looks up her Zodiac. Zodiac Mindwarp that is...

I’m willing to bet that calling themselves Mark Manning and the Love Reaction wouldn’t have been nearly as memorable. It was Manning’s stage name of Zodiac Mindwarp that first made me pick up the Tattooed Beat Messiah album back in the day, mostly because it reminded me of Zaphod Beeblebrox – I guess it's one of these random association things, people with Z initials are always going to be cool, right? I had also heard, and enjoyed, the single Prime Mover the previous year but that was really all I knew about the band so this was always going to be a bit of a shot in the dark as an album. In fact, it was only when I was doing a bit of a read-up on the band and their music for this article that I realised that Jimmy Cauty was involved in The Love Reaction in its early days and Tattooed Beat Messiah was co-produced by Bill Drummond. Considering I’ve listened to everything that The Orb and KLF have ever released, it seems they have been haunting my music collection for longer than I thought.

So, anyway, Tattooed Beat Messiah is a pretty good album for what it is – a British take on late 80’s commercial rock that was very much tongue in cheek. Don’t expect anything deep and meaningful from the songs here just lots of attitude, cheerful trashy headbanging and excellent guitar work from Cobalt Stargazer. You have the full range of stereotypical rock that you would expect, from the bombast of Let’s Break the Law to the “lighters in the air” Kids’ Stuff. Every song is built for epic air guitarness, every chorus is worded to sing/shout-along with – yes, even Untamed Stare as long as you’ve learned the lyrics ahead of time (it’s a bit fast, especially after a pint or three, try it yourself below). But, as I listen to the all tracks again now, thirty years on, I can’t help but smile. And that, I think, is the point. Zodiac Mindwarp was not out to make any profound statement or be taken seriously, with much of the artistic irony in the “drink & girls” type lyrics lost on the masses at the time, and it was fans of the likes of Alice Cooper and Motley Crue who “got” them and appreciated them. As for me? People with Z initials are still always going to be cool and Zodiac Mindwarp’s Tattooed Beat Messiah is still just bloody good fun.