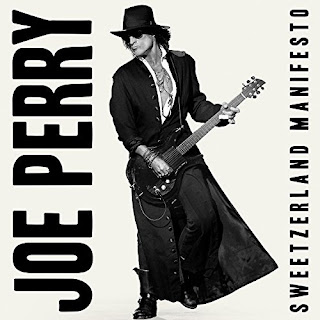 I’ve never been the kind of person that collects the solo releases of musicians from within bands I have so much love for, mainly because in my twisted imagination it feels like I’m cheating on the members of the band, and what would the singer think if I loved something by the guitarist? Strange way of thinking I know but I’m not likely to change any time soon. Which brings me to today. I’m finally listening to a Joe Perry album. I’ve waited a long time for the sublime Aerosmith to hang up their bluesy career and I now feel that Steven Tyler wouldn’t mind too much of I checked on his pal Joe. Having not listened to Perry’s quite vast back catalogue before, I wasn’t sure what to expect and that lack of expectation has made me change the way I write a review as I have no comparison to fall back on so if you’ll allow I just list the song title, give a brief note of my instant feeling upon hearing said tune and then try and wrap up my thoughts at the end. So join me as I start Sweetzerland Manifesto.

Rumble in the Jungle - Very tribal, chants, like the use of a cowbell very underrated percussion instrument, very recognisable Perry riffs. If you’d never heard this album and this was all you had to go off you’d guess Aerosmith.

Aye, Aye, Aye - Brilliant driving beats and drumming that make me wish I was watching the band play live in some seedy bar somewhere. There’s a bit of a Robert Palmer feel to the vocal. The blues piano is just lush and I’ve not used that word since 1991.

I Wanna Roll - Ooh very Nick Cave. I like this but can’t possibly tell you why.

Eve of Destruction - Kept singing ‘Hey boy don’t you lie on the tracks’ over intro. Lyrically great but gave me nothing musically like the previous tracks. Important words though. Wish I knew the original tune so I could compare.*
I’m Going Crazy - The Doors meets Aerosmith, what a fun little song.

All in all I thoroughly enjoyed this record. There was some very skilful musicianship on show especially from Perry who is one of my favourite guitarists. He can really sing though and I think that was the stand out reaction I had listening along. I knew Robin Zander, David Johansen, and Terry Reid were going to be involved and the entire ensemble delighted on every track but it’s definitely Perry that deserves all the plaudits. A Joe Perry solo outing was definitely worth the wait.

[*Editor's Footnote - Eve of Destruction was a protest song written in 1964 by P F Sloan, you can hear the most famous recording of the original by Barry McGuire from 1965 HERE]
Email ThisBlogThis!Share to TwitterShare to Facebook