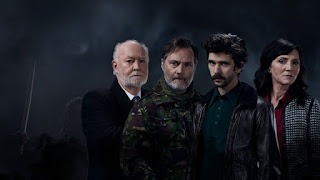 This was a cut-down rock ‘n’ roll production of Julius Caesar that managed to take a Shakespeare play, place it in a contemporary setting without hammering the director’s objectives to death. The first part of the play felt like a John Le Carré novel as the conspiracy against Caesar (David Calder) comes together. The second part becomes more war film. It’s full of sound and fury signifying something.

Calder’s Caesar is given a Trump style baseball cap, with ‘Make Rome Great Again’ on it I assume, so that we know where we are. The strength of the play is that the conspirators are made to look reasonable. If they have base motives – and later in the play Cassius’s (Michelle Fairley) honesty is called into doubt. Indeed, the play makes it clear that only Brutus (Ben Whishaw) dies an honourable man. In the beginning though it is Caesar who looks dangerous. People fear not just what he is but what he might become: a king in a land that despises kings.

The truth is though that Brutus for all his honour is conspicuously out-smarted by Marc Antony (David Morrissey). At each turn Brutus makes the wrong choice, despite the urgings of his fellow conspirators: he lets Antony live and Brutus lets Antony make a speech at Caesar’s funeral after Brutus has spoken. It is that speech that tears down the hopes of the conspirators that they might re-build the republic. Their conspiracy to prevent the rising of a King ends up sowing the seeds that will bring that prospect about for, in the wings, is Octavius (Kit Young) the man who will be Augustus, the Emperor. A man who will be King in all but name.

This lesson from this play is ‘be careful what you wish for’.

David Morrissey is excellent. He plays the funeral speech superbly, but it is clear his Antony is a man willing to say anything to get what he wants. He tells the people of Rome that Caesar has left them all money and then talks to Lepidus (Mark Penfold) and Octavius about how they can make sure this doesn’t happen. Ben Wishaw’s Brutus is clever but neither cunning or ruthless enough to defeat Antony. Brutus has a naive belief that his honesty and honour will be sufficient to win the Roman people around, but Antony hammers him to death with his honour. Whishaw is fantastic.

The whole cast though acquit themselves well. This production casts two of the leading conspirators – Cassius and Casca – with women. Shock. Horror. It works fine in this production and both Michelle Fairley (Cassius) and Adjoa Andoh (Casca) are superb.

The final battle scene are confusing, like the actual battle itself as it swings in favour of one side and then the other and as character after character dies at their own hand – mostly. The Romans never had an issue with suicide. In fact, it was an honourable way to die in the right circumstances. Not committing suicide was often seen as worse. Ah, the past. But that confusion might be a problem with the play itself than with this production.

This is excellent though. If you wanted to test the waters on Shakespeare this production might be a good place to start. They’ve cut it down so that it rolls along swiftly. I would quibble about using guns, but that is churlish in the extreme.

This production is the perfect riposte to Joel Edgerton’s nonsensical comments earlier this week when he was talking about ‘The King’, which is basically going to be Henry IV and Henry V hacked of its poetry (if Edgerton’s own description is accurate.) Edgerton is quoted as saying ‘I feel like…there is something that happens when even the most intelligent people watch Shakespeare. They feel stupid, because he does the kind of roundabout version of telling you simple things. So, we just wanted to let the audience understand exactly what was going on, and not just some people, but everybody.’

Now, that’s an admirable aim but as this Julius Caesar shows you can do that without butchering the poetry. The thing with Shakespeare is the performance, the rhythm and the words all combine to make the sense clear. Yes, occasionally you might have to concentrate a bit harder but not much. You can modernise Shakespeare without cutting his heart out. Edgerton should go see this.

I fear he might find tickets for this hard to get but you should give it a shot. You’ll thank me in the end.

Julius Caesar will also be broadcast by National Theatre Live on 22 March 2018.


On until 15th April, find tickets and more information on The Bridge Theatre Website