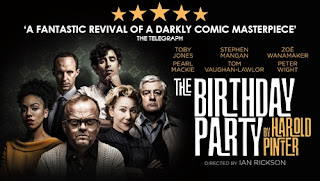 Tony Cross put on his paper hat and went to The Birthday Party at Harold Pinter Theatre...

This was the tenth Pinter play I’ve seen in my life and, as so often, I found myself – to coin a word my friend Dr Emma Parry came up with – ‘Pintered’. This is that weird feeling that settles upon you after you’ve seen a Pinter play when you find yourself trying to work out what the hell that play was about. Sometimes, like with Betrayal, it seems reasonable obvious. Sometimes though, as with The Birthday Party, you find yourself wondering for hours. Or days. Even now I’m still wondering. And I don’t think that’s a problem.

I love the uncertainty of Pinter. Not everything you see needs certainty. I wouldn’t want everything to be like Pinter but I like Pinter being Pinter. The playwright himself isn’t usually much help. He had a fondness for vagueness. The Birthday Party is about something, but what that something might be is entirely up to you.

There’s certainly issues of power and memory going on here. Sometimes it feels like you’re watching a particularly dark episode of Patrick McGoohan’s The Prisoner.* The brutal questions asked without necessarily wanting or caring about what the answers are. You can imagine a Pinter character saying, ‘Questions are a burden to others; answers are a prison for oneself.’ It also reminded me of ‘Waiting For Godot’. There’s a point where you find yourself asking why no one is leaving. Or why everyone is staying, whichever way round feels more comfortable.

The Birthday Party is set in a boarding house in an unnamed sea-side town. It is run by Meg (Zoe Wanamaker). Her husband, Petey (Peter Wight) is a deckchair attendant. We begin with breakfast. Then we meet Stanley (Toby Jones) who seems to be the central character of the play. Meg treats him partly like a child and partly like a lover. (if that isn’t the same thing.) It feels like Stanley is hiding from something, but no one can be sure of what. We meet Lulu (Pearl Mackie), who is a neighbour and friend. Lulu almost seems to represent the entrance into the play of lust, but perhaps that is an insight more into my sick and twisted mind than the authors. She flirts with Stanley and asks him to come out for a sandwich. Stanley says no.

We end the first half – sorry, the football fan in me can’t help it – with Meg’s gift to Stanley, which is a drum. But there’s a small shadow that’s been cast over things. There is talk of new guests, although Stanley doesn’t believe they will show up.

However, show up they do. Goldberg (Stephen Mangan) and McCann (Tom Vaughan-Lawlor) are suited and booted. McCann seems nervous. Goldberg is full of a bumptious bonhomie. They hear that Meg is organising Stanley a birthday party and insist on coming along. It is Goldberg and McCann who put Stanley under pressure in an interrogation that is funny, sinister and a little surreal. Stanley keeps telling them they’ve got the wrong idea.

The party itself gradually falls apart. It ends with what looks like a sexual assault by Stanley on Lulu in the dark. Then it is the next morning. Something happened. Petey, who was away playing chess, is aware things aren’t right. Either in the house or with Stanley. Goldberg and McCann state they’ll sort everything out. Lulu has a run in with Goldberg. Goldberg and McCann take the now suited and booted Stanley away, but Petey can’t bring himself to tell Meg who is worried about Stanley not coming down for breakfast.

We know nothing about who Goldberg and McCann were or why they wanted to bully Stanley. There are hints but no clear answers. Was the boarding house just a boarding house or was it meant to be a metaphor for Britain? Who knows. Do these lack of answers matter? Not to me. I enjoyed the whole thing, even in the moments of confusion. It helps that this is a fantastic cast of actors doing brilliant work. There’s not a weak link in the play. Toby Jones and Stephen Mangan have the lion's share of the lines. Both are brilliant. I never really saw Mangan as ‘hard’ but his Goldberg is genuinely rather terrifying at points. He’s one of those men who seems to be about to explode into violence, although Pinter’s men tend to talk a lot more than they hit.

Zoe Wanamaker is great too, which sounds like damning with faint praise but her slightly uncomfortable mothering of Stanley is beautifully played. Pearl Mackie, Peter Wight and Tom Vaughan-Lawlor have less to do but do what needs to be done with skill.

If you can get a ticket you should. If you’ve never seen any Pinter then you should. You’ll know from this whether you like it or not. He has a habit of getting under the skin.

* If no one has looked at the influence of Pinter and Beckett on Patrick McGoohan then they bloody well should.

The Birthday Party runs until April 14th at the Harold Pinter Theatre. Find out more and book tickets HERE
Email ThisBlogThis!Share to TwitterShare to Facebook