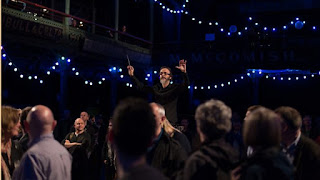 Tectonics Glasgow, the BBC Scottish Symphony Orchestra’s festival of new and experimental music, returns this May to once again push the boundaries of what music can be...

The festival brings together international and local artists, composers and performers from the worlds of classical, experimental, rock, noise, sound art, dance and visual art for two days of exploratory music-making in Glasgow on 5 and 6 May.

There are World Premieres for the BBC SSO from Naomi Pinnock, Evan Johnson and Dror Feiler, and two BBC Commissions from James Clarke and Marc Sabat. Plus the European Premiere of Ashley Fure’s piece Bound To The Bow, named a finalist for the 2017 Pulitzer Prize In Music.

French composer Pascale Criton brings a new piece to the festival, along with her regular collaborators and performers Silvia Tarozzi and Deborah Walker. They are joined by one of the world’s leading exponents of the ondes Martenot, Nathalie Forget, who opens the festival with the unmistakable sound of this unique instrument. [Editor's note - the video below was from a 2012 performance by Forget so you can hear an ondes Martenot, see the bottom of this article for details]


Tectonics Glasgow is once again curated by the BBC SSO’s Principal Guest Conductor Ilan Volkov and by Alasdair Campbell, Director of the Counterflows Festival.

Ilan Volkov says: “When we launched the first Tectonics festival in 2013 we were committed to bringing the best improvisers and new music practitioners from around the world to Glasgow, to collaborate together and with local performers and artists. That ethos has never changed and this year we welcome performers and composers from Japan, Lithuania, France, Sweden, Norway and the USA as well as UK and Scottish-based artists.”

The majority of performances will be recorded for future broadcast on BBC Radio 3.

Dominic Parker, Director of the BBC SSO, says: “Tectonics will see an amazing mix of talent from around the world gather in Glasgow for a festival that always pushes the boundaries of composers, performers and our audiences alike. There is a real appetite for this kind of experimental experience, and we are really looking forward to it.”

Audiences at Tectonics Glasgow can also experience The Burnt Room, a dance work seen in Berlin and Tel Aviv by artists and choreographers Ohad Fishof and Noa Zuk, which features a live soundtrack.

Tickets and festival passes are available from bbc.co.uk/bbcsso or by calling 0141 353 8000. Find out more at https://www.bbc.co.uk/events/r9q2fx/series