News - Riot, Under A Banner 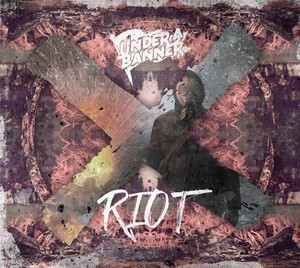 We predict a Riot as Under a Banner are crowdfunding their new five-track EP...

If you're a regular reader of the pages here at AlbieMedia you'll know that we've been following the rise and rise of Midlands based band Under A Banner for several years now, so there was much excitement when news filtered out of a new EP currently being crowdfunded on Pledge Music.

The Riot EP, as the name suggests, promises to be the band's heaviest release to date, continuing their evolution in musical terms from the folk-based early days to a more rabble-rousing hard rock feel but always retaining the intense and intelligent lyrics of the band's singer/songwriter Adam Broadhurst, who said of the upcoming release, “This is a very English album for 2018. Riot is not an invitation to riot per se, but a reflection of the confusing and contradictory times in which we live.”


The new five-song selection sees the band delving into the traditions of hard rock and metal. Inspired by bands as diverse as New Model Army, Iron Maiden, The Stranglers, The Cult and Rush, the band’s focus for anthemic choruses, big instrumentation and rich vocal harmonies has gone up several notches.

Working alongside acclaimed producer Gavin Monaghan (Robert Plant, New Model Army), the band have connected their love for raw, live energy with a desire to bring the heaviness.

“Gavin understood how we are all united by all things heavy" says drummer Tim Wilson. "We decided to push the electric elements of the band to the fore – drums, bass and guitar turned up to max with a hefty dose of keyboard and rich serving of vocal and harmony. It’s balls to the wall from the get go.”

Riot is the first record with new bassist Richard Corry (The Whiskey Syndicate) whose punchy and intense playing provides a gun slinging attack alongside Tim Wilson’s pummelling drums. Cementing all of this is Jake Brooks’ instinctive guitar playing combining an effortless mix of heavy riffs, textures and noises, Kat Davis’s 70s and 80s inspired synth sounds, and, of course, it wouldn't be the same without the band’s signature lead vocal, courtesy of Adam Broadhurst.

So why should you support the Pledge Music crowdfunder and not just wait for the EP to be released? Because, simply put, it won't BE released unless they get enough pre-orders! There's also the chance to get your hands on some superb extras along with your pre-order through Pledge Music. From new design T-shirts and Hoodies (the Gas Mask design by John Williamson), to the full back catalogue of music to real exclusive treats like hand written lyric sheets if you pledge £20 (and are quick because there's only 2 left), signed drumsticks (£15) and even a cymbal from Tim for the big spenders (£40)! Sadly you weren't quick enough off the mark to get the Fox mask that Tim the drummer wore in their last video though but you can join Adam's book club (yes, really, you can - he'll send you one of his favourite books AND he'll write you an appreciation of it. Now that's GOT to be worth the money even before you get the music.)

If that hasn't piqued your interest enough, then  try before you buy and watch the video for the first track released from the EP, Light Breaks Through, to get a feel for their new rockier sound alongside the ever-impassioned lush lyrics that have always defined the songs of Under A Banner.

As Adam himself says “We always seek to bring passion and power with what we do, although sometimes we just love to spin a good old yarn.”

Image & Info - Under A Banner

PRE-ORDER THE ALBUM AND PICK YOUR PERKS FROM PLEDGE MUSIC