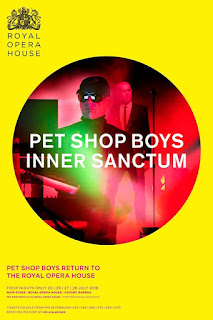 Proving that The Royal Opera House in London is not just for opera, ballet or classical music, Pet Shop Boys reclaim it as their Inner Sanctum for four days in July...

The critically-acclaimed Inner Sanctum show will return to the iconic venue two years after its debut performances sold out in record time. The show has been produced specifically for the site by long-time PSB collaborators designer Es Devlin and choreographer/director Lynne Page.

Pet Shop Boys announced the return, saying “We were thrilled to bring electronic music into the grandest musical space in London for four memorable nights in 2016. Since then we’ve often been asked if we’re planning a return to the Royal Opera House and we’re excited to confirm that we’ll be back in July.”


The dates are July 25, 26, 27 and 28. All shows start at 8pm. And the good news for those of us that can't get there to see them live, the shows on July 27 and 28 are going to be filmed for subsequent release, so we can expect a DVD, our guess is probably around Christmas time.


After the swift sell-out of the initial performances two years ago, tickets for ‘Inner Sanctum’ will be limited to four per person. Ticket prices range from £35 - £110 and are available from 1PM GMT Feb 28 from www.roh.org.uk/psb. No booking fees or delivery fees will be added to the ticket price.