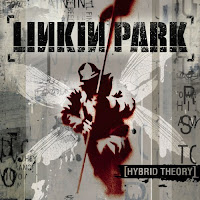 In an effort to further her musical education, Susan Omand has been set "homework" of listening to albums released after the 1980s that she has missed out on. This time she studies the Hybrid Theory of Linkin Park...

I’d always considered Linkin Park to be a bit of a one-trick pony, all distorted guitar, monotone shouty vocals and generally thunk-a thunk-a RAAAAAAAAAAR metal music of the type a friend of mine may term “a bit raucous.” However, this list that Steve and Rob have given me is meant to educate, so I realised there must be more to them than that and went into Hybrid Theory with an open mind and keen to discover what I should be hearing with the band.

Yes, this is an interesting album (for reference I listened to the 15-track Special Edition, I don’t know what difference it makes.) It also seems to be somewhat of an album of two halves as the first few tracks do still have that thunk-a RAAAR aspect that I would expect from the band but then it starts to get musically much more complex. As I listened longer, I started noting down things like lyrical rap, clever use of sampling, interesting instrumentation. I was surprised by the warmth of a piano, the subtlety of strings and the intricacy of classical guitar work. I definitely didn’t expect the 80s vibe from a lot of the electronica, especially in Crawling. In fact I noticed a lot of different influences going on in the background of all these tracks, from Flamenco to Vangelis to East 17... yes, seriously, listen to My December (https://youtu.be/9DCdCoQ49u8 ) and try not to think boy band Christmas song, all it’s lacking is the stand-up-from-your-stool key change in the middle. Anyhow I digress.

There were a few tracks I definitely enjoyed on the album, particularly the start of A Place For My Head (stamp & clap Spanish dance twisted by scratch & rap) and High Voltage (Eminem does The Exorcist), but I also found I appreciated a lot more of the album than I thought I would. There is a definite musicality to Linkin Park that I had missed. It’s intelligent work, eclectic, sometimes challenging, often surprising. Having done a bit of post-listening research, I see this was the band’s debut album and that kind of makes sense to me. Unless you knew these were all Linkin Park songs, you wouldn’t know it, if you see what I mean. It feels with Hybrid Theory that they haven’t hit upon the “Linkin Park” sound yet and are throwing a lot of different things out there, from Rap to metal to boy band ballads to see what works and what doesn’t. But this, for me, is a good thing.

So will I now go and aurally devour everything in their back catalogue? Honestly no, probably not. But neither will I switch them off without giving them a chance like I would have done before. Consider me educated - this time.