Turn That Noise Down - The Pogues 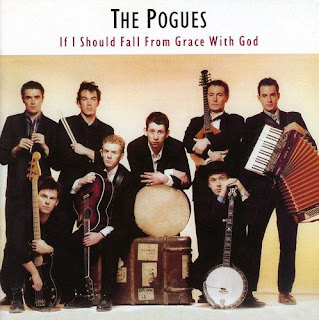 Carrying on from where we left off - it's a New Year and a new year for TTND. So many well-known albums turn 30 this year and Steve Taylor-Bryant and Susan Omand travel back to 1988 to revisit some of the sounds of their youth that made parents shout "Turn that noise down!" This week Susan takes a craic at The Pogues...

Just when you thought you were safe from Fairy Tale of New York for another eleven months I go and choose the Pogues* album that features the song as my first “Turn That Noise Down” article looking at some of the albums from 1988. Don’t worry though, there’s plenty more on If I Should Fall from Grace with God that is not festive-related in the slightest.

And it really is an eclectic album, with influences not just from the Celtic Irish traditions but covering many cultures, from American detective movies in Metropolis, where you can actually hear the sirens in the brass melodies, to the beautiful eastern influences, and instruments, of the wonderfully named The Turkish Song of the Damned. There’s the riot of the Spanish influenced Fiesta, which is a song that you may well recognise (listen below), even if you can’t sing along to it, and it sits well side by side with the traditional tunes like The Galway Races. In fact, I am always surprised to find that more of the tunes on the album are NOT traditional songs because they sound “old” if you know what I mean, they should already be folk tunes from time immemorial because they evoke the Celtic spirit so well.

But no matter how eclectic the influences of the tunes, one thing draws the album together and that is the social and political commentary imbued in the lyrics. There’s the overtly political Streets of Sorrow/Birmingham Six which draws together a ballad about the Irish Independence leader Michael Collins with a more upbeat, but still highly depressing, song about those people imprisoned without sufficient evidence. Less contentious, but no less rooted in history, is Thousands are Sailing, about the Irish Emigration to America, and the bittersweet nostalgia of the Broad Majestic Shannon.

So no, don’t write off this album just because you’re sick to the back teeth of the one song. Skip over that one if you must and let yourself be transported to the corner of an Irish pub, whiskey in hand, and just enjoy the craic with some foot-tapping tunes.

* Interesting factoid if you didn’t know. The Pogues got their name from the Gaelic phrase for “kiss my arse” (póg mo thóin) so, if you think about it, the band name really translates as Kiss. Just imagine Shane MacGowan in Gene Simmons’ make-up...