Turn That Noise Down - L A Guns 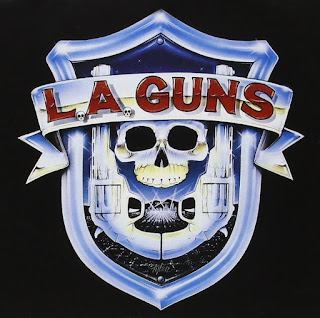 So many well-known albums turn 30 this year and Steve Taylor-Bryant and Susan Omand travel back to 1988 to revisit some of the sounds of their youth that made parents shout "Turn that noise down!" This week Steve looks back at L A Guns...

The self-titled release from L.A. Guns drifted into the crowd of other seedy glam metal records on first release and when you are a thirteen year old boy, just finding your way in a genre of music this is no surprise, you stick with what you know and play the same records over and over again so, between Motley Crue, Faster Pussycat and the other Guns band, L.A Guns didn’t get much of a look in. Then I sort of grew out of bands that used lyrics like ‘she’s gonna get it’ so it wasn’t until 2010’s non-Tracii Guns release Hollywood Forever that I even thought about them again, I’d been to some gigs in the very early 90’s which they were on the bill for but missed them on both occasions due to the queue at the bar. Listening back now, though, for this project I’ll admit I quite like them.

L.A. Guns is for sure an over the top attempt to fit in to what was going on at the time but, despite its less than complimentary view on women and obvious drug addled influences, it has some tunes that would make any greatest hits compilation of the hairspray era. Electric Gypsy is both lyrically and musically tight, it’s a foot tapper and you can’t help to move along with how catchy it is. Nothing To Lose is another that, live, if I’d just put that beer down, would have been pretty epic I’m sure. Bitch Is Back fits any Guns n Roses or Motley Crue album, which is as high a compliment as I can give a song, and Shoot For Thrills is endlessly pleasing. There are some typical late 80’s ballads included and, whilst both Cry No More and One Way Ticket are beautiful and show how musical the band actually are, I’m not sure putting them both together in the running order was a wise choice.

Tracii Guns is undoubtedly a good guitarist, Nickey Beat Alexander was tight and quite brilliant on drums, despite Steve Riley being credited even though he didn’t play on the album, and the synthesiser and orchestral work on One Way Ticket is better than November Rain by the other Guns, as well as being a few years earlier, showing that Jim Faraci was a wise choice of producer. The only problem I have with L.A. Guns is I really don’t like Phil Lewis as a vocalist. It’s like he’s trying to be Vince Neill and Axl Rose at the same time but just comes across as a bloke with a sore throat who can’t hear how pitchy he is. Despite this my year long revisit of 1988 albums is off to a flying start.