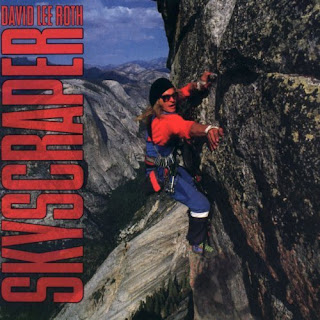 So many well-known albums turn 30 this year and Steve Taylor-Bryant and Susan Omand travel back to 1988 to revisit some of the sounds of their youth that made parents shout "Turn that noise down!" This week Susan scales the heights of Skyscraper by David Lee Roth...

Where do I even start with Diamond Dave? I’ve been a huge fan of his huge ego since I don’t know when, devouring everything he did as the front man of Van Halen so, when he went solo, of course I bought everything that was on offer and listened to his eclectic style get even more diverse as he added some wonderful jazz and country covers and, yes, even the Beach Boys to his Rock/Metal repertoire.

Skyscraper was his second solo album, after Eat ‘em and Smile in 1986, and yes that really is him proper rock climbing on the cover. Most of the songs were co-written by Steve Vai and you can really hear his guitar work throughout the whole album, especially on Hina where some clever sound engineering on his part (he produced the album) gives a superbly disorientating duet effect as the single guitar track moves from side to side making use of the stereo delay. No mean feat on 80s technology and the main reason that you should always listen to music through good headphones at least once to catch stuff like that.

In fact there’s a lot of clever stuff in the music here – please don’t write David Lee Roth off as “just another 80’s rock star”. The speed metal drums of The Bottom Line is given a psychedelic feel with distorted guitar and keyboard, the close harmony choral work at the end of the big single from the album, Just Like Paradise, is sublime and the acoustic guitar in Damn Good is highly reminiscent of Led Zep’s Stairway to Heaven underplaying the almost Marillion-like stripped back vocals of Roth. Even the straight up rock and roll of Hot Dog and a Shake bangs some Jerry Lee Lewis style piano behind the expected 80’s hair metal.

There’s not a bad track on the album but it is the title track Skyscraper that has to be my favourite here musically. It’s highly experimental, electronica with a rock beat, but there are changes in key and rhythm that make it almost jazz-like. Add in Steve Vai’s astounding guitar work and it’s the crowning glory on an album full of treasure.