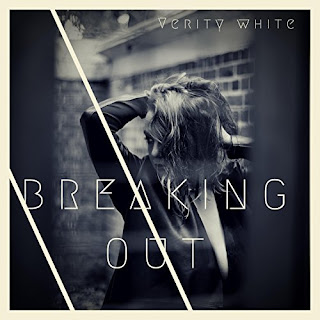 Barnaby Eaton-Jones escapes the dark days of January by chatting to Verity White and listening to her new album, Breaking Out...

Before I head into this review, I have to say I have a personal connection to Verity. Many moons ago, I persuaded her to be in my comedy improvisation troupe. I recall a long conversation with her, after one of these shows, where she thanked me for encouraging her to get back on stage again when she’d spent so long being frightened to. This genuinely shocked me and I was very humbled that she’d found some of her confidence again at this time.

If you see Verity in full flow, whether on stage with her own band or backing/supporting legendary prog-rockers Pendragon, you’ll wonder why she has any insecurities or worries or anxieties. But, as her album is dedicated to her new husband, Alex, ‘who has helped me overcome so much’, here lies a woman who has fought her own personal demons to produce a stunning debut album that makes a bold statement that she’s grown more mature, more confident, more self-assured and more in demand!

‘Breaking Out’ in more ways than one, for sure.

Frankly, I was blown away by this album. I do my best to try and support the creativity of friends and, as this album was crowdfunded on Kickstarter, I popped in my contribution. Now, here is a moment of truthful admittance: I just wasn’t prepared for how good it was.

The artwork and the photos and the design of the album are fantastic, but this wasn’t all style and no substance. I listened to the first song – the title track – and it sets out the tone of the album perfectly; you can feel the pure power and emotion in Verity’s voice.

Other reviewers have compared her vocal sound to Stevie Nicks of Fleetwood Mac but I have to disagree. Nicks has such a distinct warble and way of phrasing that wouldn’t fit these songs. If you’re old enough to remember a band called 4 Non Blondes, then think of a more controlled Linda Perry (perhaps coupled with Amy Lee from Evanescence).

But, you know, pigeon-holing a vocalist is bad practice. If you’re going to be remembered, you’ve got to be recognisable, and Verity has a voice that is uniquely her own – a sort of dirty but plummy way of delivering lyrics, with a soaring range and a way of drawing you in to see how she’ll approach the next song.

Yes, it’s essentially a rock album – as evidenced by her first single she released, ‘I Don’t Care’ - but there’s some haunting electronica in there and some fantastic grooves. It really is an album that mixes up styles and every track feels different but unmistakably Verity White, and that bodes well for future releases.

The production by Arpeggio Creative is pitch-perfect, the music is tight, intricate and multi-layered, with Verity’s voice sweeping majestically over it all. There’s a retro ’80s vibe to it, in places, which was brilliant to hear.

At the moment, Verity has just finished a short tour and has been picking up plenty of plaudits and fans along the way but she still found time to answer a few questions.

Barnaby Eaton-Jones (BEJ): Hey, Verity! Thanks for agreeing to the interview. Let’s leap straight in. What was the sort of music you were brought up on and does that somehow filter through to your own songwriting and singing style?

Verity White (VW): A variety of Fleetwood Mac, Dire Straits, classic soul and Motown. I used to watch my parents in their band (Hot Banana!) and wish it was me. So everything they sang and practiced I heard too, and obviously whatever we had on at home. I think there are influences of those. Styles in what I’m writing yes a lot of people have compared my voice to Stevie Nicks in places so that’s a pretty amazing compliment! I definitely take a lot of emotional influence from soul and Motown, I always relished the way they could perform and put across real passion in everything they wrote - I try to emulate that passion and emotional prescience in my music too.

BEJ: You tour as a backing singer with Pendragon, what's been your experiences with them?

VW: Amazing! The best thing about Pendragon is we’re like a family, they are all such nice people and so supportive of what I do outside of the band as well. The experience on stage is always fun too, as they have big crowds and i get to travel to some awesome places; last year we went to Japan and Canada and there’s talk of South America soon! They also kindly let me support them on the last tour with my own music, so kind.

BEJ: Had you considered going solo or do you prefer to be surrounded by an ensemble? Your husband, Alex, co-produced the album with you and tours as your guitarist - has there been differences of opinions on how to mix songs or how to present yourself live on stage or has it been all smooooooth sailing?

VW: I definitely prefer to have a band around me, the energy is just so much more fun, and the stage show more interesting for the punters too. I’ve performed solo before and quite frankly I find it a bit lonely up there on my own! As for working with Alex, it’s actually been great, I get the final say on every mix so if I was something added or taken away it happens - but usually he gets it bang on straight away. Stage wise, that’s my domain, he does what he’s told and I get free reign to be a mental as I like ;) ... on the tour we just finished I acquired a new unicorn toy from the Fiddlers Elbow staff in London. Alex hates it as it has been covered in fake blood and town in weird places due to it being a Halloween toy. But it still comes on stage with us... so I win ;) 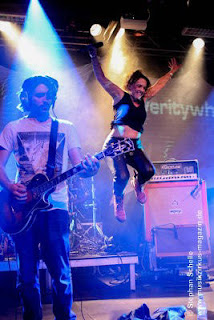 BEJ: How important is it to find your own persona and relay that to an audience, or order to succeed? How long did it take you to find out who you were and were you were comfortable within the musical sphere?

VW: Woah isn’t that exactly what the album is about in a nutshell!! It has taken me all of my life and I’m still not 100% sure ... I think its. Work in progress. Though the recent year has proven to me that maybe I am better than I thought I was at all this. Which is rather nice.

BEJ: You come from a musical family, so have you always been encouraged to sing?

VW: There are plenty of stories of my dancing about and performing wherever there was music (shops, restaurants, people’s houses, etc...) when I was small so I think that when I was little yes it was encouraged. However, I lost all my self-confidence after my parents’ divorce. I’m quite open about the fact that from that point onwards I had childhood depression which turned into adulthood depression and anxiety disorders, so I stopped myself doing what I wanted to do as I was too scared. It wasn’t until I met Alex that I started to believe in myself.

BEJ: In the deluge of great reviews you've had for this album, you are always being compared to other singers. Who's the singer you most empathise with yourself and how different vocally do you think you are to them?

VW: Yeah. It’s been a bit mental actually! I’m overwhelmed and so grateful to everyone who’s even listened to it. Never did I think I’d get this far! Probably Stevie Nicks as I’ve always loved her vocals, delicate and raw - passion and emotion. There’s a lot I emulate from her, but my voice is a lot bigger than hers which I can get a lot more power and much rockier with it.

BEJ: If you had to pick a Top Five of your favourite albums, what would they be today? I know they can always change week by week, depending on how you're feeling!

VW: Yes, and thank you for the caveat...

Nine Inch Nails - The Fragile is ALWAYS in there, this week it is joined by: Amanda Palmer - Who Killed Amanda Palmer, Veruca Salt - Eight Arms to Hold You, CHVCHES - Every Open Eye and Foo Fighters - The Colour and The Shape. 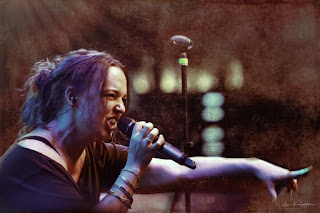 BEJ: Has the amount of attention you've had with this first release been a surprise to you or are you pleased at how you've orchestrated your outlet of creativity to meet the demands of a society that seems to demand more and more of artists today?

VW: A huge surprise!! I’m super pleased of course, but I have been genuinely shocked. Sure I have put a lot of effort into social media and PR to attempt to attract attention to it, but even with that there’s no guarantee with your release that they’re going to like it even if they like you. So it’s been amazing, and very special.

BEJ: Have you started working on the second album yet? Can you give us an exclusive line of lyrics?

VW: I have, but before I do that I’m working on a new song for my Patreon supporters, they get exclusive tracks. Here’s a snippet: “... I never thought that you would understand, I look for shelter and you take my hand, and I hold on to what makes me strong”

BEJ: 'Breaking Out', as you've said yourself, refers to your growing confidence in who you are and keeping your demons at bay. Has the album been a cathartic process in terms of that growth?

VW: Very much so, I’ve processed out a lot of anger in that album and I think it shows. Some of the songs are reflective, like I Don’t Care which is about my time at Uni; but some are where I am now in my life - for example Exhale and See Through are very much how I’m feeling right now. Don’t worry though, there are plenty more demons left for me to tap into!

BEJ: Looking forward to hearing you wrestle with them in musical form soon! Verity White, thank you very much.


You can contribute to Verity's ongoing creativity by signing up to her Patreon, via her website: www.veritywhite.com, or just grab her debut album of a rising star from iTunes, Bandcamp or Amazon.