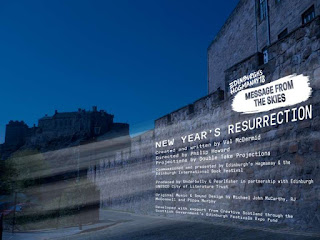 "The Queen of Crime", Val McDermid, leads a collaboration of Scottish artists with Message from the Skies: New Year's Resurrection...

Inspired by a line from Robert Burns’ poem Sketch New Year’s Day. To Mrs Dunlop (1790), Edinburgh’s Hogmanay and the Edinburgh International Book Festival have commissioned author Val McDermid to write a short story, New Year’s Resurrection, which will be told in a series of chapters through projections and other art onto buildings and landmarks around Edinburgh.

The project encourages residents and visitors to explore Edinburgh’s iconic locations in a new light: streets and buildings which have inspired some of the world’s finest authors over the centuries - from Sir Arthur Conan Doyle and Robert Louis Stevenson to J K Rowling and Muriel Spark, and the streets and buildings which McDermid and her other collaborators have been inspired by and to which all the artists respond in this unique piece of work, made especially for Edinburgh. It is inspired by the nineteenth century tradition of publishing novels chapter by chapter: readers must go from location to location to read the whole story, simultaneously exploring both this piece of new work and the city.

Val has revealed that in New Year’s Resurrection she will resurrect Susan Ferrier, an Edinburgh born and bred novelist in the nineteenth century, saying “The most remarkable thing about the nineteenth century Scottish novelist Susan Edmonstone Ferrier is that she has all but disappeared from our consciousness. In her lifetime, her novels were wildly popular, earning her significantly more substantial publisher’s advances than Jane Austen. And yet now almost nobody knows her name. Susan Ferrier deserves better than this.”

The starting point and the site of the first chapter is Parliament Square, off the Royal Mile in Edinburgh’s Old Town. From there, readers can navigate by using an app or following the signage leading to the next instalment. The app is filled with additional content about the story and locations, and will translate Val’s story into seven languages – French, German, Italian, Japanese, Mandarin, Polish and Spanish, making the project equally accessible to visitors to Edinburgh. The app will also read the text in English to visually impaired audiences.

Director Philip Howard said “It is a story and a walking tour but also a quasi-theatrical experience and we have quite a few tricks up our sleeves. Susan Ferrier’s is a remarkable story, and Val asks some very topical questions about why as a female Scottish writer Ferrier has been excised from the literary history of the nation. It’s a beautiful piece of storytelling but Val has had a lot of fun with it as well. We’re treading a course between honouring Susan’s legacy and restoring her voice and having a little bit of a crime caper along the way.”

Find out more about the free event, which runs until 25th January, and download the app here.