Feature - A Lifetime of Motley Crue 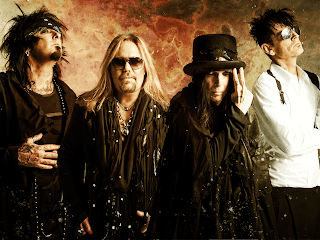 Someone let the head of our own motley crew, Steve Taylor-Bryant, read the papers again and he's now on a Motley Crue music binge so we had to share it with you. You're welcome...

Some things are inevitable. 8 Mile was always going to make a great film, based loosely on Eminem’s life; working class white boy makes it big in predominantly black music genre, and Straight Outta Compton telling the rise of NWA had to be made, they are pretty much responsible for the commerciality of rap music and their tale is a great one. Another inevitability is, to badly quote Denis Leary, Motley Crue would never overdose on drugs and die they would just keep making records, and whilst the stories of excess within rock music have always entertained, let's be honest and say none of us demanded a film about Motley Crue did we? We’re still getting one though, The Dirt has been cast! Seriously! There is a Motley Crue movie coming, based on the book the band wrote with Neil Strauss and I’ll tell you now I am more excited about this than maybe I should be (proof I’m not hallucinating http://www.imdb.com/title/tt0800325/ ) which has left me thinking a lot about my time listening to them and what my highlights are, my memories. So as way of therapy I’m now offloading all the Motley related crap in my head onto you.

I’ll not include the final show in 2015 in these memories of mine as I have the Blu-ray of the show and now the Crue are fresh in my mind I will undoubtedly unleash a review on you all, so I’ll begin where it started for me, the album Too Fast for Love.

The year I discovered this gem was 1985, I was only 7 when the album came out, but as a 10 year old I was a grown up boy stealing music from his friends. I stole the 7” vinyl single of Live Wire from a school chum and rushed home to our music cellar (we lived on a military camp in Germany and had a cellar where my parents put my drum kit and a record player to keep my devil music away from any dignitaries that may visit). Live Wire had it all for ten year old me, pounding drums, great tempo, screechy vocals the like I’d never heard, and is still a favourite of mine today.


I then went on a few years and collected everything I could, Tommy Lee joining my favourite drummers list in fourth behind Buddy Rich who in my opinion invented drumming, John Bonham who first introduced me to weird time signatures, and Keith Moon, who was the very first bonafide rock “star” I’d come across. But none of them had played upside down in a gyroscope cage thingy... “I had this sick, mother flipping (my mum will read this) dream one night, well check this poo (mum again) out for yourself” [Editor's note to Steve's Mum: please don't watch the video!]


Then came the most consistently good album to that point, 1987’s Dr. Feelgood. Packed to the rafters with singles, added intensity in listening due to the fact Vince Neill was to be no more the Crue frontman, and that, to be honest, sounds nowhere near as cheesy as I thought it would be this time around. The songwriting had improved over the course of the 1980’s and as a band musically they were at their strongest with real investment in production. Oh and the videos were gloriously over the top cliches, fire, girls, hair shots, cinematic stories that have nothing to do with the song. Look!


John Corabi enters the band in 1992 as Vince Neill’s replacement and there is a dramatic shift in style. The former Angora and The Scream singer had a radically different voice to Vince and, with the ever growing popularity in the sound coming out of Seattle, it was natural that a band reinventing themselves would change. I’m not most people so I had a lot of time for Corabi and the new sound. I don’t judge those fans who couldn’t accept it though, and I watched the show where Tommy Lee went back to high school so my taste isn’t infallible. But I liked Corabi so I’m including some, the rest of you can write your own article if you don’t like it.


But then Vince came back! And they made Generation Swine, then Tommy left (no, you were heartbroken) and since I have no good memories of the band without Tommy (no, you stop crying) here’s a song from Generation Swine. To be fair to them it’s not that bad but it would have probably have made me quit the band too.


Overall my memories of Crue all seem to come back to Tommy Lee and/or a live show. Whatever you think of Motley Crue the shows were always brilliant, the bands live sound was tight, ticket prices and merchandise was always fairly priced, something the band strived to do throughout their career and fans appreciate fairness, but most of all the shows got bigger and better, they pushed the boundaries between concert and performance art, they rocked hard never once phoning it in. I’ll not mention more due to the farewell Blu-ray calling me but I will leave you with this, which goes a little way to showing what’s involved. Now, don’t go away mad, just go away.