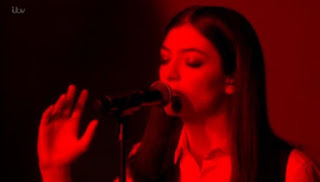 As we come to the end of our Bowie Week celebrations, a reminder that, however fondly we remember the past, there's always something new around the corner. Two years ago, Steve Taylor-Bryant discovered something wonderful and totally unique thanks to Bowie and the Brit Awards...

Something beautiful always comes from tragedy. I genuinely don't know who to affiliate that quote with, or even if it is a quote, but it was said to me by a therapist after a personal tragedy a few years ago and, quite honestly, I used bad language, some exuberant hand gestures and didn't go back for counselling for a long time. Fast forward a few long years and I'm in a better state mentally and that quote has recently come to mind after viewing something on television. The event was the Brit Awards or, more specifically, the David Bowie tribute and the artist that sang Life on Mars.

I knew nothing of Lorde before the Brits. Bowie himself had called the young woman the future of music but it's not the first time someone I admire has thrown compliments at a young artist and, to be honest, I tend to ignore them as they are nearly all wrong. Bowie's passing was a tragedy for the entire world and affected me more than Freddie Mercury's, and he got an entire concert of tributes live from Wembley Stadium, and thus far all we had received for Bowie was Lady Gaga showing herself to have no clue what a tribute should be. Then it was announced there would be a tribute at the Brits and, knowing what a fake tan bubblegum travesty of a show the Brits can be, I decided not to watch. I couldn't watch another wannabe celebrity fawn about pretending Bowie had touched their life in some way, even if the great man himself loved this particular rising star. A few days later trusted friends, friends I know wouldn't make me watch something upsetting, let me know via social media that the Lorde section of the Brits was indeed worth watching so I trot to YouTube and my word they were right!

This young girl I knew nothing about stood up on the world's stage in front of millions of people and David Bowie's own musicians and made me cry. Tears of sadness at the loss of a hero, tears of joy at one of the best performances ever produced on British television and immediately I knew that Bowie was right, as I crave a future in music that contains singers like this. Searching the Internet for more information and songs I may have missed from this remarkable young lady showed me a songwriter who defies her young stature with an old and beautiful soul, a singer with a voice that could carry angels to heaven, and a bravery not seen by many so young any more.

Oh my Lorde how I am a fan now. Oh my Lorde you really are our musical future.