Bowie Week - Never Let Me Down 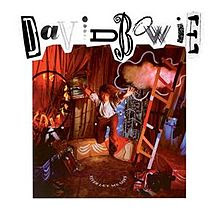 A reminder of the only time (so far) that Bowie has made it into our Turn That Noise Down feature looking back at albums from a specific year. Susan Omand looks back at "Eighties Bowie" and the album Never Let Me Down...

You know how every Doctor Who fan has “their” Doctor? It may be the Doctor that was in it when they first started watching, or the one that they empathised most with, or some other, but that one iteration of the Timelord is “theirs” and they will not hear a bad word said against him?

This is “my” Bowie. Eighties commercial Bowie – all bright suits and blond bouffant. While I adore individual tracks from earlier albums, loved the Berlin era and embraced the experimental albums of the 90s and beyond, the 80s was the time that I bought anything and everything Bowie released. Let’s Dance, Tonight and this one, Never Let Me Down, are the whole albums I loved best. The music was danceable, it was so eighties in instrument and rhythm that it made good “chart pop” and, I would say, caught the height of his commercial appeal. It was also the time that the “cool” Bowie fans hated the most purely because of that reason. Going back to the Doctor Who analogy, this was Tennant era Bowie. This was the era that the Bowie-machine seemed to “sell out.”

That’s not to say though that it was all shallow bubblegum. The subjects of some of the songs in these three albums were highly political, like the statements against racist oppression in Let’s Dance and China Girl or the anti-establishmentism of Loving The Alien. And you have to remember that these albums only seem commercial in hindsight. At the time, and for Bowie, they were a radical shift.

You could tell, though, that Never Let Me Down was an album from a Bowie who was yet again on the cusp of regeneration. The music was starting to experiment again, he was starting to push the boundaries, trying new sounds and styles. It was a transitional album as he clawed his way out of the integrity-busting pop charts and back into underground rock and roll. There is still the 80’s funk sound reminiscent of the likes of Absolute Beginners in songs like Day In Day Out but, with Time Will Crawl (below), you start to hear the influence of Tin Machine, his group side project, creeping in. And then you get the almost War of the Worlds-like Glass Spider introduction. Contrasting again with the discordant guitars, driving drums and rap lyrics (yes Bowie had a rap song before it was a thing) of Shining Star.

It would be three years from the release of this album before I finally saw Bowie play live, taking the bus from Aberdeen to Milton Keynes for his Sound & Vision tour and his nominal “farewell” to his back catalogue of work. And, whichever Bowie is “your” Bowie, you have to agree that it was some back catalogue.