Bowie Week - In Praise of the Bowie Mindset 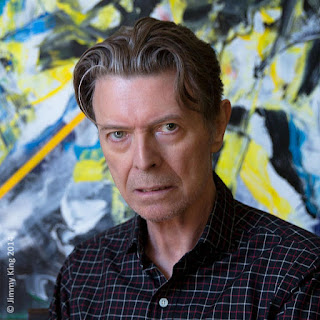 For Bowie Week, a reminder from two years ago of Neil Vogler's look at the wider influence of David Bowie...

Bowie meant different things to all of us, because he had so many guises. His influence on popular creative culture and on contemporary Western culture in general cannot be overstated. He was monumentally important, monumentally relevant, monumentally talented. His influence on me personally, and my creative work, is incalculable. I can’t even begin to count the number of hours I’ve spent writing to his music over my lifetime, my brain feeding off the raw energy of his albums. Hell, the protagonist in my first novel is a Bowie obsessive who is constantly delivering his verdicts on Bowie’s albums across the course of the narrative. Arguably, that character’s obsession is greater than mine. Arguably.

Others will write about Bowie’s legacy in more depth and with far more skill than I. But I wanted to say that, with his passing, there’s one of Bowie’s guises that I’m really going to miss most of all: late-period, mature Bowie.

Bowie offered a particular template for artists on how to live into maturity. He resisted nostalgia at every turn. Bowie didn’t want to put together a legacy tour and shill the same hits every night, and he didn’t suddenly decide to start putting out covers albums with tunes from the Great American Songbook on them. Instead, he was always pushing forward as an artist, always consumed with what came next. If he ever looked back it was only a quick glance, a brief nod to help inform the new thing he was about to unveil. You get the sense that he couldn’t tolerate the idea of standing still. Here was a man who understood that producing anything that could be labeled as “same old, same old” meant dying an artistic death. Here was a man who refused to be caught in any kind of creative loop. He fed his mind, consuming art and fashion and history and devouring music of all styles. And then he fed his work with what he had discovered, forging new paths at every turn, with every release.

There are very few artists who are as relentlessly, uncompromisingly creative as Bowie. He was on a perpetual voyage of discovery, and though his themes remained his themes across his lifetime, he never stopped questing after them in different ways. He never got too comfortable. He was endlessly evolving, and involving, and innovative. He was always asking questions in his music, right up until the very end.

The Next Day was an incredible record. Blackstar is an incredible record. Bowie was proof that age is no barrier to creativity and the power of thought and ideas. In difficult times it was always a source of great solace to me that one of my artistic heroes was still out there, in his late sixties, thinking, evolving, creating and working. Still seeking answers. Still figuring himself and the world out, with seemingly no let up in his powers and abilities. Still producing brilliant, unyieldingly interesting work.

He’s gone, and we can never go forward with Bowie again. We can only look back, and marvel at what he left for us.

It was with great sadness that I took delivery of Blackstar on CD today (I’ve been listening to the MP3s since its release), because I realised that I’ll never be able to take delivery of a brand new Bowie album again. That’s it. It’s really all over.

But what a man. What a legacy. What a way to live.

Thank you, David Bowie. We’ll never see your like again, but your life is an inspiration to all of us who create, whatever our particular discipline. Like you, may we never get too comfortable, and never stop moving forwards.