Turn That Noise Down – Review of the Year 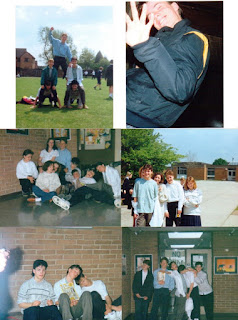 We asked Steve Taylor-Bryant for his review of the year. He sent us this. It turns out we forgot to tell him WHICH year...

Well. What a year it has been. Here I am writing my thoughts on the last twelve months for AlbieMedia dot com. I am twelve. I’m pretty sure this is child labour. I’m also not sure what a dot com is, sounds futuristic though doesn’t it? I doubt it’ll take off. People reading articles on their computers? That sounds nearly as daft as the bloke who thinks one day telephones will be “mobile”. The knobhead. I survived a 300lb car bomb the other day. The Irish people off the news tried to kill some army men on our camp, just round the corner from my house. I slept through it. It was strange because mum said I could sleep through a bomb and I thought she was joking. It was wicked because when the army men were finished moving bricks and glass me and my friends used the crater as a BMX ramp. Anyway, 1987 huh? Quite the year. A lot happened this year, most of it I don’t understand because it’s all big boy stuff, but I’ll list a few things I heard my daddy talking about and a few things I learned from the playground.

Zeebrugge happened. That was sad. I didn’t know ferries could tip over and since when we leave Germany we are going home on a ferry I’m quite nervous. That President man from Spitting Image, Mr Reagan, has been over here. He asked a man with coffee on his head to tear down a wall. Pretty sure that’ll never happen, the wall has too much writing on it. The coffee headed man had an aeroplane land outside his house which was strange, I mean who lives in a place called Red Square anyhow? We get The Tracey Ullman Show over here due to the amount of ‘Mericans on our camp and she just had a wicked cool cartoon on called The Simpsons. The dad was a fat yellow man. Hilarious. Apparently the workmen of England and France have started digging a tunnel under the sea, can’t see that working to be honest, how will they know if they are both digging in right direction? That Margaret woman that goes on TV and stuff has become Prime Minister for the third time, people must really like her. A criminal has been captured for doing bad things and the judge put him jail because of something called DNA, this pleases me. I wish all science words were this easy to spell.

On the pop culture side of things, I heard Tommy Vance call it that on the radio, that man plays his music really loud, it’ll hurt his ears, there is lots of films out that I’d like to see. Robocop sounds awesome – a man who is a police man and then a robot? That is so rad! The swearing man with the great laugh is going to be Axel F again in another one of those films. I like the music, doo doo do dad do doo doo. Brilliant! Mork has been sent to a jungle to talk to soldiers in a film called Good Morning. I don’t know where Vietnam is though. Mr Hepworth in school says it’s not near Germany so I probably won’t get to meet him. Music is a weird one this year. I really liked Gary Moore though, and The Cult brought out a great record. I scratched mine when I moved the record player to 33 from 45. Gutted. Faster Pussycat are brilliant and what a great name for a band. Their singer has a lot of hairspray on his head though. My science teacher says that he is probably hurting the Oh Zone Lay or something. Apparently rock stars are as bad as fridges, or something, I wasn’t really listening.

Level 42 are brilliant as well. The man with the guitar that only has four strings makes it sound like an electric drum kit. He’s great.U2 brought out a new record but my friend said that Bonio the singer is becoming a knobhead and talking about stuff that people don’t care about. Midnight Oil do that a lot as well but their singer is cool. A band called Guns and Roses did a record that is super awesome. It’s really loud and all about boobs and the drinks that mummy likes. They won’t last though as their singer has a really sore throat so I doubt he’ll last very long. Heart are still going though, my sister likes them, and Gloria Estefan is so pretty when she dances.

Well that was my year. Pointless writing it to be honest, nothing much happened, except the crater as a BMX track that was rad. How much is 300lb anyway? Sounds expensive for a bomb. I’ll be back next year where I’m sure I’ll have more important things to talk about. Music this decade has been wicked cool so I bet 1988 is gonna be off the hook (I heard Ice-T say that… and hoe… and fuck… a lot…that dude doesn’t like policemen).

Image - One of Steve's school friends.
Email ThisBlogThis!Share to TwitterShare to Facebook