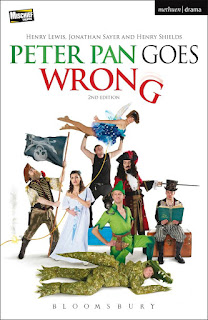 Going to the Theatre can feel like a lottery sometimes, even with professionally put together plays, you just don't know what you are letting yourself in for. The more technically demanding a production is, the higher the risk of the performance experiencing difficulties. For example, Les Miserables getting by a power cut which meant that a matinee performance of the award winning show had to be halted. There are some things you just can’t plan for and this is even truer with amateur theatre. The rash of pantomimes on offer across the country during the festive period can mean either a great night out or a frustrating master class in how not to do theatre. The 1982 hit play Noises Off was written by English playwright Michael Frayn and was from an experience he had of such a theatrical disaster. Mischief Theatre have received accolades for their west end and touring hit The Play That Goes Wrong, which tells the story of The Cornley Polytechnic Drama Society's disastrous efforts to deliver great theatre. Billed as a kind of Fawlty Towers for the stage it has received rave reviews from critics and theatre goers alike. Now, Cornley are back to perform a Christmas Vignette, it’s not a pantomime, and as before all does not go to plan.

Taking my seat in the front row of the stalls I am immediately assailed by one of the actors who welcomes me to the performance. Further back two stage managers are wrestling with a traffic cone and various props which they clearly are not happy with. From the outset, Peter Pan Goes Wrong is not your normal, run of the mill, show as I find out a few moments later. As I open my packet of smarties (other confectionery is available) I am asked for my name and as the whole auditorium sing happy birthday to me I have to inform them that it isn't my birthday. Clearly embarrassed, the actor apologises profusely as do the stage managers. This is all part of the experience and it is a striking achievement that, even before the curtain rises, ineptitude is the order of the day. I have always remarked that to deliver a bad performance in a deliberate and crowd pleasing manner takes true brilliance. Think about Les Dawson, an accomplished pianist, or Tommy Cooper who was a talented magician, they both delivered performances as bad artists whilst not being anything of the sort. So it is the case with the company of Mischief Theatre. Peter Pan Goes Wrong features every cliché and overacting nuance you can think of and a great deal more besides.

Whilst following the story of Peter Pan in true panto, sorry vignette, style the overacting and miss cues are evident with every word uttered. Michael Darling is played by a small bearded man, very much like Uncle Albert from Only Fools and Horses, due to an unforeseen mishap with the young actor who was originally slated for the role. Pantomime is not normally known for understatement but Wendy Darling is performed so gloriously over the top that the play descends into farce rapidly. By the end of the first half we have witnessed Nana, the dog, trapped in the dog flap and Mr Darling has been stabbed in the leg with a pair of scissors. Peter Pan. Himself, is a victim of very poor flying (theatrical term used to hoist actors above the stage) and is slammed into the set so hard he is unable to continue with the performance. I have seen Peter Pan performed many times but never before have I witnessed the flight to Neverland so badly managed. As the wires are pulled taught they whisk the clothes up and leave the actors, on stage, red faced and down to just their underwear.

The cast perform with a glorious over the top manner that is testament to the consummate actors they clearly are. Of particular note is Harry Kershaw, who plays Francis Beaumont (Narrator), constantly appearing from stage right in a chair which is really not functioning properly. Showering the audience, and my coffee, with glitter he falls victim of the ill-behaved chair at the end of act 2. Beaumont's performance is absolutely tremendous and I look forward to seeing more of him in future productions. As Director and playing Captain Hook, Lawrence Pears is sublime both in his dual role as the despotic chief and actor. It is his insistence that the show is not a pantomime but a Christmas Vignette that causes his ongoing irritation with the audience who just won’t shut up. His outburst and eventual artistic strop had the audience crying with laughter, which only infuriated him more.

As the final curtain falls and the remaining cast take their bows, Tinkerbell was electrocuted due to a terrible decision to wire her costume to the mains, I reflect on what I have just witnessed. Peter Pan Goes Wrong grabs hold of your funny bone and tightens its grip throughout the play. I have never laughed so hard and so constantly during a theatre trip before, the show is quite simply the funniest production I have seen in my life. With the original The Play That Goes Wrong touring again next year I urge you to go and see it.