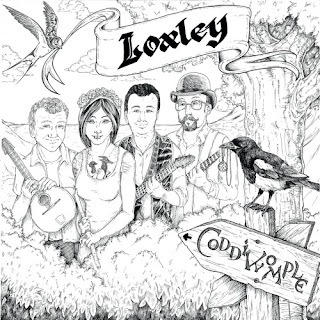 Loxley – Live at Cobbs Mill as investigated by the Defective Inspector...

DID YOU KNOW, I am a Druid. It’s true! I don’t mean it in the D&D or WoW sense of the word, I genuinely robe up, shake my staff about and legally accept responsibility for its use. Unsurprisingly this means I love Folk bands, the lyrics and instruments really do match my lifestyle a little too well. Shamefully I’ve had a copy of a folk album for around 3 months and only recently have I had the chance to listen to it. It’s taken me so long that the band have released a new album! Ah well, let’s see if I can catch up a little bit…


Loxley are technically a four-piece band who wander the south coast of England to bring some pagan influences on old classics with occasionally modern twists. In this particular 2015 recording the set increased to seven-piece to widen the musical repertoire. It’s understandable when you listen to album as there is a pretty diverse gaggle of tunes to pick from but they all do firmly remain in the Folk category. The diversity really comes from the topic of choice and how bouncy you feel. “The Boatman” for example feel like something I’d listen to when hiking through the sloping hills of Ireland while “Good Ship Kangaroo” (I am not sure why either) is much more upbeat which demands a tap of the foot if not a dance or two.

It’s difficult for me to dissect the band properly, the website states they are a four-piece and I can clearly hear a string instrument throughout many tracks from Live at Cobbs Mill but it’s not listed on their website. If I isolate my opinion to this particular album I think all the instruments, vocals and melodies snuggle together rather nicely and form a cohesive enjoyable composition. The only issue I had with the recording itself was a slight balancing concern, the female singer Alana clearly has a voice worth reckoning with but it seems almost muted. On the other hand one of the male vocalists, assuming it’s Mark Saunders, was much more prominent. It’s not to say Mark isn’t a good singer, rather the opposite as he is my favourite part of “Little Before Me Time”*, but I never felt vocally the spotlight was shared when they both sang. I can imagine balancing these two to be a difficult trick and my knowledge of music production is pretty slim. I did find out by asking the band that the entire album was recorded in one day as a group, hence the term “Live at Cobbs Mill”. So, it isn’t a recording from a live show, instead it’s a recording of a live set. This does make me wonder if balancing was ever possible in such a brief time in this environment.


I’ll also give a few nods to Julian for playing such a beautiful instrument as the Cittern, not something I hear enough in Folk music. My problem is I am a sucker for string instruments in Folk and the lack of backing drums (big up to the Bodhrán) saddens me a little bit knowing that in person this may not always be the case. In an unusual turn of events I also want to honour the bassist Lee Love. Not just for his inspired biography but also his strong bass skills really holds the tune together with no strong percussion about and that makes him an unsung hero, like most Bassist’s.

After listening to the album I did feel a longing for the trees, so it ticks the Folk band criteria. Alana’s melodies, Mark’s cheeky audibles, Julian’s crisp Cittern and Lee’s mellow bass make a fine assortment of pleasant noises no doubt. There are a few issues with balancing, the occasional smack of the lips sneaks into a track or two but considering it was recorded as a live set in one day I am impressed. I can’t wait to get my hands on Coddiwomple to both see how they’ve evolved and, more importantly, learn what the hell a Coddiwomple is.

[*Erratum - Occasionally I make mistakes: The singer of Little Before Me Time is actually Julian, nice pipes Julian!]


You can listen to, watch, purchase or follow Loxley by clicking below!