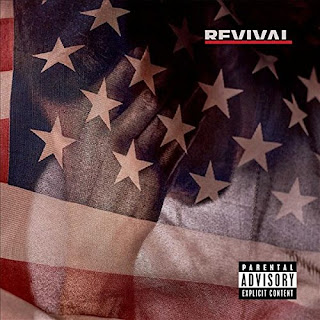 Steve Taylor-Bryant checks to see in the real Slim Shady still stands up as he listens to Eminem's latest album Revival...

Music fans seem to go into listening to any new Eminem release with more than a little trepidation nowadays, and some of his later releases perhaps haven’t cleared the very high bar he set previously. Revival reviews and social media commentary appeared to be split and being a few days behind schedule in my review work I couldn’t get my first listen in without some of the world's thoughts dripping into my expectations. What I’ve actually found though is a project that could have been an epic release but lacks a little something that, on third listen, I think I’ve worked out what it was that needed fixing.

Kids look to me like as a god, this is retarded
If only they knew, it's a facade and it’s exhaustive
And I try to not listen to nonsense
But if you bitches are trying to strip me of my confidence

and despite some beautiful vocals from Beyoncé any listener should know from this first track that we have a more reflective artist writing now, taking that angst he fired at everyone back in the day at more specialised targets this time around. And I’m fine with that.

Untouchable looks at the racism within American law enforcement, it touches on the Colin Kaepernick fallout, and it rips white policemen a new one. Some fans have been upset by how political Eminem has got in recent years, but you can’t write The Slim Shady LP in this day and age. In 1999 when Eminem was the star we all seem to want him to remain the world was different, we always had right and left in politics but we didn’t have far right fascism then, we didn’t have as much mainstream hatred then, also Eminem was a young man he’s now a middle aged man, he is no longer addicted to medications and believe this, from a recovering addict, that makes a hell of a difference, he is full of life experience and loss and tragedy. You can’t be funny all the time anymore, you can’t get away with rapping about boobs and booze anymore, if you have an audience you have to use your voice to educate or insight and Untouchable does all this with aplomb.

Remind Me with its I Love Rock n Roll element is more classic old skool Eminem and probably what most fans wish he’d do more than the social commentary stuff (not me though) and is incredibly catchy. But it’s a rarity on an album more based on angry reflection.

Someone get this Aryan a sheet
Time to bury him, so tell him to prepare to get impeached
Everybody on your feet
This is where is where terrorism and heroism meets, square up in the streets
This chump barely even sleeps
All he does is watch Fox News like a parrot and repeats
While he looks like a canary with a beak
Why you think banned transgenders from the military with a tweet?

Eminem has long pointed his lens at political people but usually in a humorous way, never really commenting on anything in a serious way, not his thing or not wanting to offend his listenership? I don’t know, but he doesn’t hold back here and I think we’ve been asking those with a voice to shout from the rooftops for so long that you have to commend him. It’s also a great tune with the always incredible Alicia Keys.

There’s a lot of reflective verses as Eminem looks back at his childhood, his fraught relationship with Kim, his mother, his father, he looks at his own personal failings as both a man and a father and Bad Husband, Castle, and Arose are pretty much his admission of his guilt in his life and feel heartfelt and full of pain but maybe I’m just in that point in my own life where looking at your past can be painful, maybe these tunes don’t speak to the audience at large, perhaps listeners younger than my own 42 years aren’t ready to look that deeply inside themselves yet. The songs spoke to me though.

If I end this review with the statement ‘Framed is definitely tightest song’ that leads me into what I think the biggest issue is. Production tightness, a coherent sound maybe. If you look at the production credits on Revival they hit double figures and therein lies the issue - too many fingers in the pie. Eminem has written some epic thoughts, some very poignant memories, some much needed political thoughts, and then multiple music industry folk have all fought to have their feel put across. That maybe how the industry works now, it may be how you make commercially successful music but it feels like the emotion in the lyric, the message, has been watered down. If there had been just one producer working alongside this more mature artist I firmly believe Revival would hit heights it may not get to now.

An honest reflection on his life and the state of the world that nearly works at an epic level, but slightly misses the mark. Still a very good album though and one I’ll listen to a lot in the months to come.