News - A Message from Earth 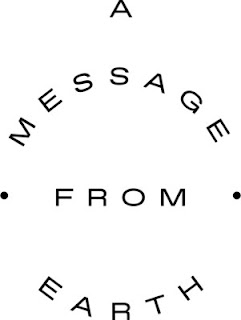 In celebration of the 40th anniversary of The Golden Record project, WeTransfer has partnered with Stink Studios, Gilles Peterson, Oneohtrix Point Never, S U R V I V E, Wanda Diaz Merced and more to present A Message from Earth...

[Ed's note - You didn't have anything else planned for today did you? Good. I lost a good few hours exploring the Message From Earth website at https://amessagefrom.earth/ - you have been warned! Now read the press release below...]

"We cast this message into the cosmos…a present from a small distant world.
We are attempting to survive our time so we may live into yours." - President Jimmy Carter, on the Voyager Golden Record

This interactive exhibition of specially-commissioned music, film, art and literature pays tribute to the ambitious, optimistic spirit of the original Golden Record. Forty years ago, a group led by astronomer Carl Sagan set themselves a seemingly impossible challenge – to sum up what it means to be human, and capture these images, sounds, music and greetings on two Golden Records. These were placed aboard NASA's Voyager I and II, two spacecraft blasted into space to go further than anything man-made had ever gone before. The records were intended as a message from Earth for any extraterrestrial life that might find them.

The unique online exhibition "A Message from Earth" represents a collage of the contemporary human condition, and features new and exclusive pieces from leading artists, musicians, photographers, authors, and scientists. Their works are commissioned to celebrate themes of hope, determination, and goodwill, are inspired by the original project. The exhibition's intention is to relay a message of goodwill and encourage further exploration while raising awareness and funding for Astronomers without Borders, the Carl Sagan Institute at Cornell University, and the SETI Institute. WeTransfer is providing $10,000 grants to each institution to initiate public donations, and the project will be commemorated in a $15 limited edition zine with 100% of generated revenues going to the non-profits above.

"WeTransfer came from the creative community, and as a company we embrace projects like the Voyager Golden Record to inspire us. We've collaborated with 40 individuals and organizations from over 20 countries to put this together, and we're humbled by the people we've been able to work with," says Stephen Canfield, WeTransfer's VP of Marketing. "We've had a strong commitment to arts and sciences since 2009, and this felt like a natural next step for us - closely collaborating with amazing people to tell a story that's inspired so many. The Voyager Golden Record shows what we can do when we come together to create and share something bigger than us, and that feels like a welcome message in 2017. We hope others feel the same, and that we can use this to raise funding for more exploration and selfless acts of cultural diplomacy in the years to come."

Chapters of A Message from Earth: A Collage of the Contemporary Human Condition, include:


Preface: A comic of illustrations by Sophy Hollington telling the story and brief history of the original Golden Record.


1. Greetings: Wanda Díaz Merced, a blind astronomer who uses sonification to study interstellar events, presents a study of stars as heard on earth - with a selection of images curated by NASA's Rebecca Roth.

3. Sounds: An interactive, custom-designed sound collage generator allows visitors to contribute their own unique sound to the project, using and manipulating sounds produced by S U R V I V E, the group best known for scoring Netflix's Stranger Things.

Epilogue: An animated video collaboration produced in response to the question "do we matter?", with a musical score from Oneohtrix Point Never and Voyager short film by WeTransfer Studios.

This exhibition hopes to raise awareness and funding to aid in the creation of more projects like the Golden Record in the future. Site visitors can go to amessagefrom.earth to donate.

About the Voyager Golden Record

When Voyager 1 and Voyager 2 launched in 1977 to explore the far reaches of our solar system, each spacecraft held a gold-plated copper phonograph record containing music, language, sounds of Earth, and 120 encoded images. The content was curated by a team led by noted astronomer and educator Carl Sagan, aiming to provide a vision of Earth for any extraterrestrial intelligence the probes might encounter: our sounds, science, images, grandest thoughts, greatest achievements, and deepest feelings.

The contents include greetings in 55 languages, music from the likes of Chuck Berry, Bach, and indigenous peoples around the world, scenes of civilization and wilderness, laughter, birdsong, and the brainwaves of a young woman in love. Forty years on, the twin Voyagers are farther away from Earth than any human-made object has ever been, and built to the twin Voyagers and their Golden Recordswill essentially drift forever among the stars.

The Golden Record was released on vinyl for the first time in 2017, as part of a Kickstarter campaign led by Ozma Records. The most successful music Kickstarter in history sold out quickly, but lavish CD and LP boxsets were recently made available for purchase again. 2xCD and book will be in stores December 8, 2017 and 3xLP boxset will be in stores February 16, 2018. Both can be preordered at: http://www.ozmarecords.com/.

Find out more at https://amessagefrom.earth