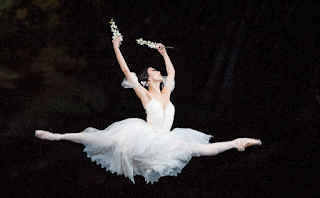 A signature work of The Royal Ballet repertory, Peter Wright's haunting production of Giselle returns to the Royal Opera House for 2018...

Based on Marius Petipa's 1884 work, after the original choreography by Jean Coralli and Jules Perrot, Giselle offers one of the most challenging roles for any ballerina.

This quintessential romantic ballet tells the story of Giselle, cruelly betrayed in love by her aristocratic suitor. Heartbroken, Giselle kills herself and her soul enters the ranks of the Wilis - shades of young women who died before their wedding day. In the midst of a moonlit forest, Albrecht appears and falls into their deadly trap. Giselle's spirit intercedes and her sacrifice saves Albrecht's life, liberating her own soul in the process.

Giselle runs from Friday 19 January - Friday 9 March. Find out more and book tickets on the website at http://www.roh.org.uk/productions/giselle-by-peter-wright